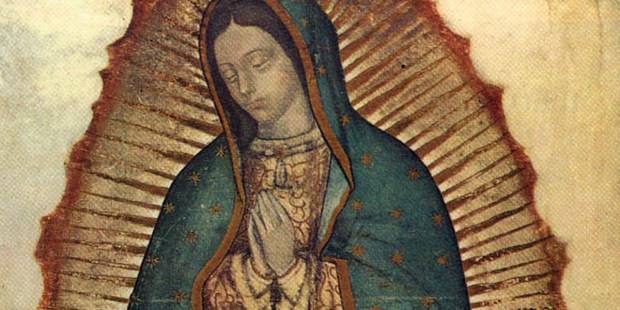 200 years before her appearance in Mexico, Our Lady appeared on Mount Guadalupe in Spain.

A little-known fact in the English-speaking world is that the Marian title of Our Lady of Guadalupe predates the apparition to Juan Diego in Mexico and finds its origin in Spain. The story begins in the 7th century, when the Holy Father gave a statue of Our Lady to the bishop of Seville.

During the 8th century a battle was fought in the region where the statue was kept and a few local inhabitants sought to protect the precious statue of Our Lady, taking it out of harm’s way. They took it as far as Mount Guadalupe in Extremadura, Spain and hid it in a cave located at its base. Afterwards no one knew of its location and it stayed in the cave for nearly six centuries.

Then in 1326 a herdsman named Gil went in search of a lost cow near Mount Guadalupe. Unfortunately he found the cow, dead, and was about to use his knife to begin taking the hide off when the cow suddenly rose and was restored to health. Then Gil turned and saw a beautiful Lady. She spoke to him and revealed to him the location of the missing statue.

I am the Mother of the Redeemer, and it was I who restored life to the dead animal. Go to the priest and the people, and tell them that it is my wish that they should come and remove the stones that obstruct this cave, where they will find my image. Tell them to have a chapel erected on this spot, and in time to come I shall make the shrine a center of my heavenly power and protection.

Gil went to tell others about what happened, but discovered that his son had died. He was grieved over his loss, but he had hope that Our Lady would intercede for him and raise his son to life. She did so during the funeral and all who were present were astonished.

Shortly thereafter they went to the cave and found the statue where Our Lady had instructed them. A chapel was built at the location and eventually a large shrine to Our Lady of Guadalupe was established.

Interestingly enough, many of the Spanish explorers who journeyed to the New World had a devotion to Our Lady of Guadalupe and placed their journeys under her protection.

Later she would appear again, this time to Juan Diego in Mexico and her miraculous image would become one of the most famous images in the world.