Two disabled pro-life advocates join together in a moving song 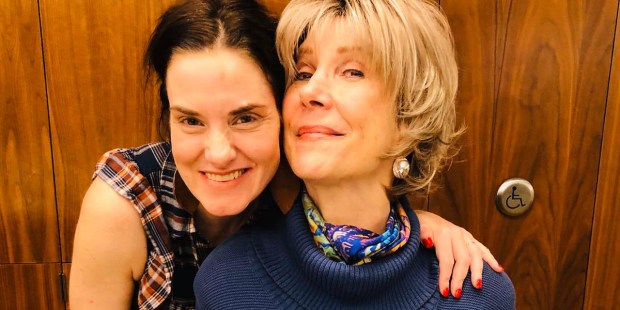 And the result is truly uplifting!

Radio host, Christian author, and advocate for the disabled Joni Eareckson Tada recently shared on Facebook a video she made with one of her guests, Gianna Jessen. Along with the video, Tada told a brief story about Jessen and how she survived an abortion attempt.

Remarkably, Jessen was born weighing 2.5 pounds, after the saline abortion her birth mother was undergoing failed. Instead of signing notes concerning the procedure, the doctor actually signed her birth certificate. Although Jessen had cerebral palsy as a result of the abortion attempt, she was adopted at the age of four and has gone on to share her love and appreciation of life as a pro-life advocate on an international level.

While receiving an award from the Life Action group in Southern California for all of her efforts, Jessen met up with Tada in her studio and they finished their meeting with a little duet. As Tada shared in her post, the occasion allowed for “two women with disabilities to lift their voices in glorious harmony, all for the listening pleasure of our Savior and King.”

By watching the video you’ll feel the sheer love these two women have for their heavenly Father, even though they’ve both faced extremely challenging situations in their lives. Their joy is contagious and most inspiring, especially during Advent when we are filled with  hope and faith about the coming of Jesus Christ.

Gianna Jessen is an internationally renowned pro-life advocate who was born in 1977 to a teenager during a failed saline abortion. She only weighed 2.5 pounds at birth. Because of the abortion attempt, Gianna was left with cerebral palsy (which she describes as a "tremendous gift"). Her birth certificate is signed by the doctor who was performing the abortion, and thank the Lord, she was adopted at the age of 4.I met Gianna many years ago when she was just a child, but recently she was in Southern California to receive an award from Life Action, a national pro-life group. I've always admired her tireless advocacy, and so I was delighted when Gianna wanted to come to Joni and Friends for a visit (and lunch from Panera Bread :-). After our meal, I discovered that she is quite the singer and so, to close out our blessed time together, we harmonized on an old favorite for us both.After our impromptu song, tears filled my eyes – I am sure God brought Gianna to our headquarters for many reasons that day, but I think the best reason was for two women with disabilities to lift their voices in glorious harmony, all for the listening pleasure of our Savior and King. By the way, if you know this old gospel melody, sing along with this brief 'on the spot' video – and perhaps do a little 3 part harmony!

Read more:
The carpenter who teaches his teen apprentices to be pro-life through their trade

Read more:
Listen to this woman with cerebral palsy stun the crowd with her angelic voice (VIDEO)