Caring for others is a “waste of time”: Here’s why it’s fundamental 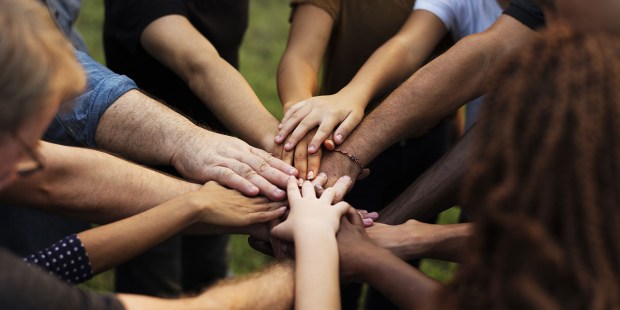 Like liturgy, solidarity requires doing something for the sake of doing it.

A theologian once described liturgy to me as “time wasted for God.” The public prayers of the Church are not useful as the world might see it, but they allow us to be present to the Almighty. Paradoxically then, the “worthless” opportunity for sacred communion is the most worthwhile thing a person can do.

In a similar way we might say that solidarity, one of the hinge principles of Catholic Social Teaching, is loving concern wasted on strangers. It may not be apparent why I should have anything to do with the fate of culturally or geographically distant people; but the Gospels invite us to join in the saving and liberating will of Christ for all people, especially the least.

Each December the Dominican Order celebrates the Month for Peace, in which it focuses solidarity on a particular part of the world where its members — friars, nuns, active sisters, and laity — are present.

This year the focus is India.

The moral call of solidarity is based on the reality of a common human nature. No matter how different we are, we all share the same basic concerns; our destinies are intertwined. “No man is an island entire of itself,” as Donne put it.

Faith teaches us moreover that we are all children of the same Father. It is not mere idealism to think we should help the poor and suffering of the world. Love starts at home but grows to a global concern. Catholic social thought spurs us to bring our faith to bear on global questions of justice.

We begin with awareness, which leads to prayer; then prayer stirs us to action — through donations, political engagement, volunteering and perhaps all the way to the total self-donation represented by some of the saints and missionaries of the Church. One thinks of St. Teresa of Calcutta, who poured herself out for the poor of India and throughout the world. Blessed Rani Maria Vattalil was martyred for the sake of development in the rural sub-continent. The Dominican Family in India cries out now for our solidarity on behalf of the neediest there.

Read more:
I’m back from Calcutta and still having nightmares

India is a vast and beautiful country with a rich history and a vibrant Christian minority. It also, despite recent economic growth, experiences poverty and injustice in a pressing way.

The Dominican brothers and sisters there invite others to focus on three segments of society who suffer violence by way of deprivation or repression: women, children, and tribal communities. Women there disproportionately lack the benefits of economic and social development. Children are too often orphaned and exploited. Tribal communities, who comprise over 100 million people in India, are often displaced, isolated, and indebted to unjust landowners.

Dominicans worldwide are encouraged to lead prayer services, host talks, preach and even make works of art that contribute to healing and reconciliation. It is also possible to contribute to two projects in service of the health and well-being of children in which the Order is involved: Project Bloom and Safe Childhood. See here for more information and how to donate: Dominican Month For Peace.

Perhaps one should not try to evade a cynical sounding question that can come to mind: What do the problems of Indian women, children, and tribal minorities have to do with me?

If intended with a modicum of openness, it is not a bad question. And it is precisely on this brink of apathy that the Christian social principle of solidarity provides an answer. There is indeed no reason to care — no reason other than love and respect for human dignity. No self-interest, cultural kinship, or jingoistic principle drives the concern — it is only the “wastefulness” of mercy, selflessness directed to the other for the other’s sake.

We are grateful for our Indian brothers and sisters in the Dominican Order for bringing to our awareness some of the troubles and anxieties in their part of the world. Such awareness helps us grow in compassion and wisdom. We deepen our membership in the fraternity of humankind and our union with the Sacred Heart of Jesus simply by spending a moment — a mustard seed of time — to pray and ponder how to lessen their grief.

Here in Baltimore at SS. Philip and James University Parish, we are blessed by the presence of numerous Indian parishioners — both immigrants who have made their home here and students at Johns Hopkins University, which we friars serve as campus ministers. So before the Dominican Month for Peace even came around, the faith and spirit of India had come to our parish community.

Just as we hope to help those far away, we also touch the hearts of friends and neighbors who have come to our country for different reasons. That is the lesson of the solidarity: we are all one. Eventually those far away will be close, their concerns will be ours — if not in this world then in the world to come.

Read more:
Pope: We should think about death with one word