Why every parish needs a social media ministry

There are many ways for the Church to reach the "digital continent."

In February 2004 in Cambridge,  Massachusetts, Facebook made its initial debut as a small communications network for students of Harvard University. It’s doubtful that anyone at the time had any notion that what had been set in motion would cause a revolution in communications that would reshape the world.

But it wasn’t just Facebook that caused this communications revolution; the evolution of the internet, the birth of the smartphone, and the ever increasing speeds of wireless technologies paved the way for exponential growth and the emergence of countless other innovations.

Today this technology has been blamed for disrupting elections, causing revolutions, and furthering agendas. On the other hand, it’s been credited for reuniting friends and families, creating limitless opportunity for e-commerce, and giving a voice to anyone who has something to say.

In only 15 years, this confluence of technology has given rise to the most powerful communications medium in the history of the human race, referred to simply as social media.

For the Church this is very good news. 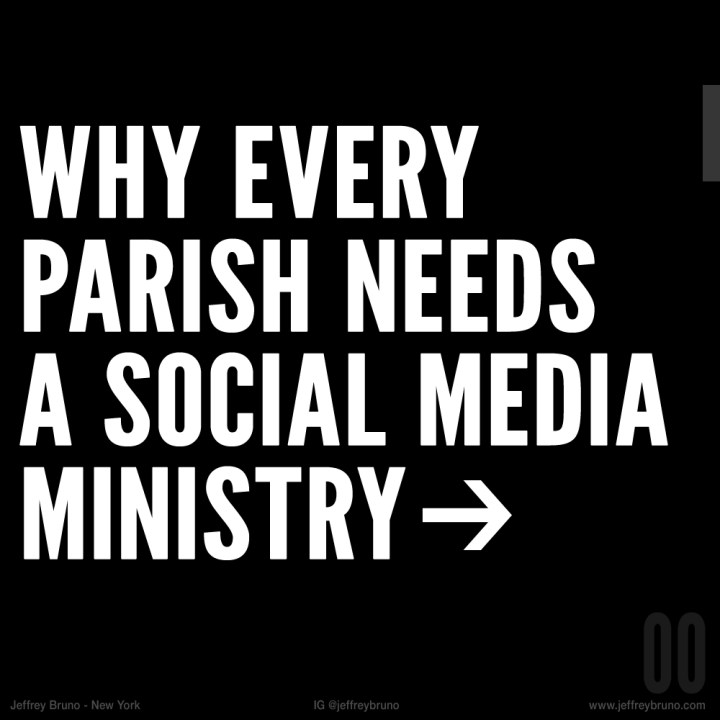 As cultural Christianity has declined and the Church has suffered through scandals and attacks, Mass attendance, vocations, and the Gospel imprint on society have decreased.

Faced with such a challenge, the Church must communicate effectively through technology. While many parishes have websites and social media accounts, there remains too much ignorance when it comes to their effective use. The skills and strategy that are required to execute successfully are simply not there. But in acknowledging this truth comes opportunity. Opportunity to get started, to learn, and to bring the voice of the Church into the realm in which is it is essentially absent.

So where to start?

Every parish needs a social media ministry. This is an intentional, specific ministry that brings the voice of the parish to its geographical area through social media networks. The objective is to interact and build community, raise awareness of the parish and its activities, and provide content to inspire, educate, and evangelize. This aims to result in parish growth and a renewed image of the Church.

Why a ministry? Because it should be under the umbrella of the parish’s authority structures, functioning in accordance with the Church’s mandates and decrees in an official capacity.

Who would run it? Ideally it would have at least one full time person dedicated only to social media and the development of content. This can be augmented with volunteers to assist. Social media requires a lot of time.

What does a social media minister do, and what qualifications does he or she need? A social media minister would be responsible for creating video, voice, visual and text content, selecting third party content to redistribute, and responding to comments and messages. They would attend parish events for the purpose of reporting on these.

As far as qualifications go, he or she should have the heart of a missionary evangelist and a strong comprehension of all things Catholic, ideally he/she should be able to take decent photos and video (using a smartphone is perfectly acceptable), a strong familiarity with social media, the ability to write copy that has impact, and do some basic graphic design.

A social media minister is essentially the director of what could be considered the parish’s “media company.”

In a world where the primary source of information, entertainment, and communication is the mobile device and where the majority of the time spent on these devices is on social networks, those who understand the language and produce content are shaping the worldview.

“Christ has no online presence but yours”: Meredith Gould

The impact that a strong social media ministry can have on a community cannot be overstated. To be able to reach and engage those who are outside the Church — the lapsed Catholics, the divorced, the marginalized, the unchurched and the young. From showing the stories of faith lived out, connecting to and building community, and becoming a voice that stands out in the culture bringing the message of faith, hope, and love to a wounded world. The potential is limitless.

If you are concerned with the decrease in Mass attendance, the decrease in knowledge of the Faith, the decrease in vocations, and the narrative that is being  conveyed by those outside the Church, and you are not fully committed to employing this massive communications infrastructure that’s free to use and at everyone’s disposal, then you share in the blame.

It’s time for the Church to effectively join the conversation and the time to act is now.

St. Gabriel, patron saint of communications, please pray for us.

“Believers are increasingly aware that, unless the Good News is made known also in the digital world, it may be absent in the experience of many people for whom this existential space is important.” Pope Benedict XVI