While it wasn't exactly festive compared to today's standards, Christmas was certainly a busy time of year in a medieval monastery.

Today only ruins remain of Rievaulx Abbey, the once-great Cistercian abbey in the North of England. Before Henry VIII dissolved the monasteries in 1538, Rievaulx was one of the largest and wealthiest monasteries, with 140 monks and as many as 500 lay brothers in residence.

Until the mid-14th century, the monks followed the Rule of Saint Benedict, a guide for living in community, composed by Benedict of Nursia in 516.Scholars with English Heritage, the organization tasked with maintaining 400 historic sites, have put together a picture of what life must have been like for monks at Rievaulx during Advent and Christmas. 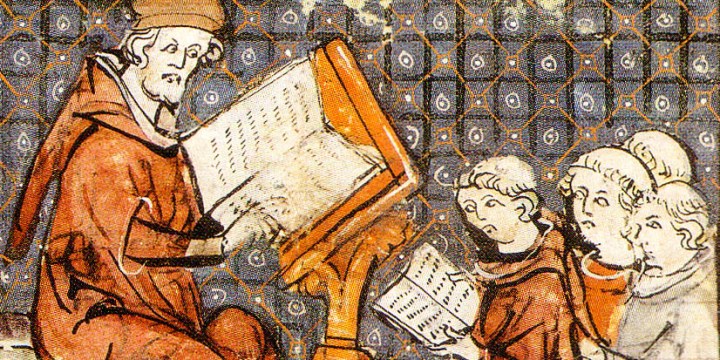 Throughout the year, a medieval monk’s day was spent largely in manual labor and in prayer.Christmas was no different, although the shorter days made for less time spent doing both.

The monks’ day was divided into three parts, according to English Heritage. Most of the day was spent in opus Dei, the Divine Office, which was made up of eight church services or “offices” held throughout the day.

The rest of the day was taken up with lectio divina or spiritual reading in the morning, and opus manuum, manual labor in the afternoon. For the monks at Rievaulx, this could mean gardening, joinery, or copying manuscripts.

The Rule of St. Benedict aimed to encourage moderation in all things, including diet:

[E]xcess [is to] be avoided above all things, that no monk be ever guilty of [consuming too much]; for nothing is more unworthy of any Christian than gluttony.

Although we read that wine is by no means a drink for monks, yet, since in our days the monks cannot be convinced of this, let us at least agree to this, that we do not drink to satiety, but sparingly.

During Advent the monks followed a stricter regimen. Eggs, animal fat, milk and foods made from milk were forbidden.

According to English Heritage, the rules had relaxed by the 15th century, and meat was eaten twice a week, and very likely eaten on Christmas Day.

In addition to the eight daily offices, which began at 3:30 a.m., there were three Masses on Christmas Day — Midnight Mass, Mass at Dawn, and the Mass of the Day, also known as High Mass. The monks would also hear a sermon in their chapter house in the morning.

The ruins of Rievaulx Abbey are a popular tourist destination and are open to visitors from 10 a.m. to 4 p.m. on Saturdays and Sundays. Audio tours are available to accompany one through the ruins. A museum displays artifacts that tell the story of the once-great Abbey.