Why is St. Anthony of Padua depicted holding the Child Jesus? 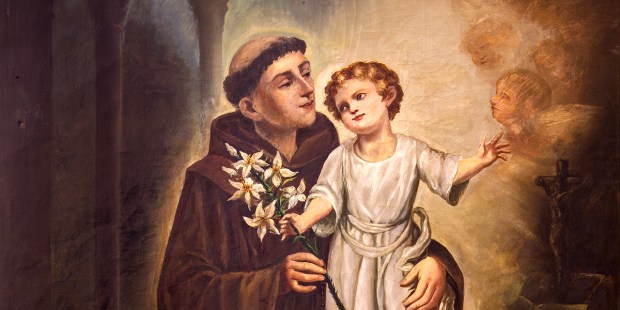 The popular depiction highlights a unique mystical experience Anthony had during his life.

Next to St. Joseph and the Blessed Virgin Mary, St. Anthony of Padua is the saint who is most often depicted in statues or images holding the Child Jesus.

The tradition honors a mystical experience St. Anthony had during his life that was witnessed by a benefactor who gave the Franciscan saint a place to stay for the night. One version of the story is narrated in The Life of St. Anthony published in 1895.

While traveling through Limoges a pious benefactor gave [St. Anthony] lodging, and … assigned him a room separated from the others. It was night when the owner, either by chance or on purpose, passed near the room of the saint, and he observed that rays of unusual light came through the cracks of the door. He was curious to know the reason of that light, and approached the door very slowly. He saw Anthony kneeling, as if in ecstasy, and, full of wonder, admiring and caressing a loving child of rare beauty, who was tenderly embracing the saint. Then the man knew, from the affectionate conversation, and from the superhuman beauty, that it was Jesus Christ who, under the appearance of a loving child, was pleased to visit His faithful servant and fill him with His ineffable consolation.

In subsequent depictions of this interaction, the Child Jesus is seen caressing St. Anthony’s face, full of love for the holy Franciscan.

The mystical vision highlights the child-like simplicity of St. Anthony and the purity of his faith. He is known for his profound sermons and his love and care for the poor. His sanctity was so well-known throughout the Church that he was canonized less than one year after his death.

The encounter also recalls Jesus’ words to his disciples, “Amen, I say to you, unless you turn and become like children, you will not enter the kingdom of heaven” (Matthew 18:3).

St. Anthony of Padua exemplified that type of faith and the vision he had was a special grace confirming his profound union with God.

Read more:
Consecrate yourself to the Child Jesus this Christmas