Singing seminarians use YouTube to bring back Latin Chant 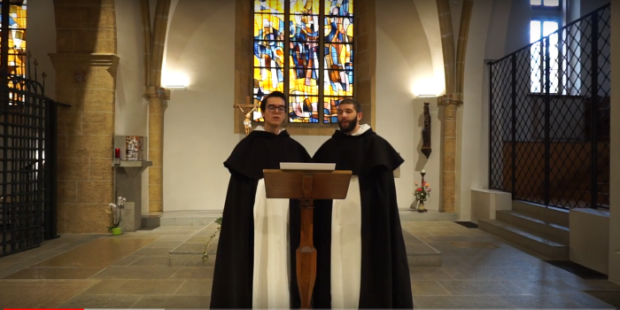 Two friars from Fribourg in Switzerland have launched a YouTube channel to propagate and teach the treasure of the Dominican liturgy in ancient Latin chant. Originally intended for religious communities, this channel, though only a few months old, has already gained more than 2,200 subscribers.

“Alas, there were no online resources,” say Brothers Stefan Ansinger and Alexandre Frezzato, two young men who have been studying chant for the past year.

The Dominican seminarians, 27 and 28 years of age, care deeply about the Dominican liturgy, a trove of riches that goes back 800 years. Having studied in Fribourg for two and three years respectively, they were hungry for more traditional music in their own community. So they decided to harness the power of new technology.

The two young men have launched a YouTube channel to share Dominican Latin chant melodies with other communities, and anyone willing to learn. “The advantage of Gregorian chant is that there is no problem of language or translation!” says Brother Alexander with a wink.

The Brothers want to revive and teach the Latin chant tradition, but that’s not all. “We want to blend aesthetic pleasure with the practical business of learning,” Brother Alexandre tells Aleteia.

“The beautiful settings we choose for our videos encourage our own communities, but they also help to attract the greatest number of students of sacred song.” Using beauty to communicate the Faith is a time-honored technique, but Brother Alexandre has come up with a clever slogan that brings it into the 21st century: “En-chant the internet!”

Brothers Stefan and Alexandre had a hunch that there were many in the world who wanted a way to learn chant online. After less than two months online, their bet paid has off. Yet there have been a few surprises.

One surprise has been the strength of the reaction. The OPChant YouTube channel already has more than 2,200 subscribers and 22,000 views. “We have benefited from word of mouth, thanks in particular to our American and Polish brothers, who were thrilled with this project. There are string chant traditions in those countries. More surprisingly, though, we have had great feedback from lay Dominicans in Holland, Argentina, and even India. They use these songs as part of their daily prayers, which I find really touching.” There are 6,500 Dominican friars and 2,500 nuns in the world, but lay Dominicans (also called “Tertiaries”) are much more numerous. This global network, build over generations, has helped the channel explode.

On the technical side, the two Brothers show a level of competence one does not always associate with men in medieval robes.

Brother Alexandre explains, “When it’s time to make a new video, we select our material and rehearse it at home in the priory. Then, we scout out a church or chapel, if possible close to home, where the acoustics are excellent. We have found that the old churches are best. Here in Fribourg, the Cistercian sisters of La Maigrauge have welcomed us with open arms. Their monastery is 1000 years old.”

Then there are the technological aspects. “When we get there, we set up a lectern, a microphone, a tripod, our digital camera, and that’s it. All we have to do is sing.”

The result is a simple but professional recording. All that’s left to do is a little editing, synchronizing sound and video. For friars who grew up online, these are simple and not very time-consuming maneuvers. Their elders, however, are bemused.

The OPChant channel is unique because it is timed to the calendar of the Church’s liturgical year. “During November and December, we posted the Christmas Mass entrance hymns, antiphons from the vigil of the Nativity and Midnight Mass, the Christmas Day Mass, and so on and on,” says Brother Alexandre. The videos are posted with enough lead-time to allow students to learn the new material before it is called for in the liturgy.

For those who want to discover a new repertoire for the new liturgical year, it is not too late to start. All are welcome for a free weekly lesson, straight from the Alps. All you have to do is subscribe!