On Nigerian beheadings, “Where is the moral revulsion?” 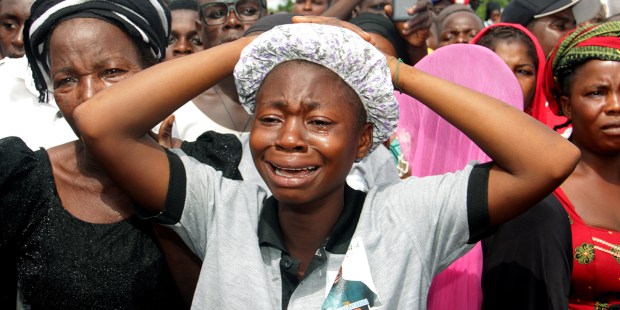 A video released by ISIS West African Province (ISWAP) the day after Christmas showed the apparent beheading on Christmas Day of 10 Christians held hostage by the group. An eleventh man, identified as a Muslim, was shot. “Where is the moral revulsion at this tragedy?” asked Bishop Matthew Kukah of Sokoto, Nigeria.

“This is part of a much wider drama we are living with on a daily basis,” said the bishop told Aid to the Church in Need. He added that it is “very difficult to know why the government has not made progress in dealing with the crisis; 30 people are killed, 59 people are killed—and such incidents only produce a formal condemnation” on the part of the country’s leadership, “but no sense of urgency.” “We move on as if all this is normal,” he added. According to the Council on Foreign Relations’ Nigeria Security Tracker, Islamist insurgencies have killed more than 36,000 people in Nigeria in the past 10 years, including Boko Haram militants, civilians, and Nigerian military.

ISWAP proclaimed that the killings came in retaliation for the deaths in late October of ISIS leader Abu bakr al-Baghdadi and the group’s spokesperson Abul-Hasan Al-Muhajir at the hands of US special forces.

On Christmas Eve, Boko Haram, the Islamist organization from which ISWAP had split off, attacked a village near the town of Chibok in the northeastern state of Borno, killing seven people. It was in Chibok where Boko Haram kidnapped 276 schoolgirls in 2014; 112 girls remain in captivity.

Noting that far more Muslims are being killed by Islamists in Nigeria, Bishop Kukah nonetheless questioned why every significant security post in the country is occupied by a Muslim. He said that Christians should be represented, given the fact that “religion is a major fault line” in Nigeria. The prelate called on the international community “to put pressure on Nigeria to protect lives.” “Things cannot go on,” he said, and perpetrators “must be brought to justice.”

Responding to plans by France and the US to reduce their military footprint in West Africa, the bishop said that the US and the European nations have a duty to prevent violence on the continent whose natural resources Western powers are so eager to take advantage of. The bishop rejected the argument that Western nations make of having to stay out of “the internal affairs” of African nations. “They want to exploit the continent’s oil and mineral resources, but they don’t want to protect people,” said Bishop Kukah.

He added that “70 percent” of the various crises that are engulfing the continent are sparked by the contest for mineral resources and the bishop charged that “international corporations are breeding corruption,” which is at the root of so much unrest. If Western nations “want to pull their troops out of Africa, they should also get out of the business of mineral resources—they have to be with us in good times and bad,” said Bishop Kukah. Moreover, he concluded, the ravages of Islamists in Africa “are the fallout of wars started by Western nations in the Middle East.”

This article was published by Aid to the Church in Need and is republished here with kind permission. To learn more or to help ACN visit www.churchinneed.org