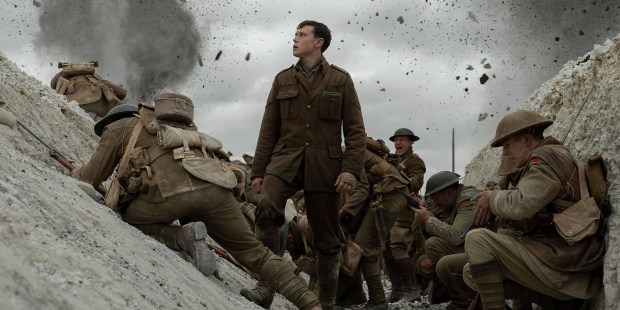 While the movie has the thrilling feel of an immersive video game, it leaves the viewer pondering the horror and futility of war.

For a generation of young men raised playing “first-person shooter games” like Call of Duty, the movie 1917 must feel like familiar territory.

In the new epic World War I movie, director Sam Mendes uses a “one-shot” technique to tell the story of two young British soldiers on a mission to deliver a life-saving message about the position of German troops. As the camera follows the soldiers, the viewer feels as if he is, sometimes unwillingly, tagging along through the trenches to an uncertain fate.

As soon as the two soldiers, Schofield and Blake, set off on their mission, we’re with them every step of the way. We get an uncomfortable taste of their fear as they make every turn through the trenches, climb every ladder, not knowing whether they will survive to see the next day.

The result is an immersive experience, probably very similar to the addicting adrenalin-fueled high of video games.

While the promise of a video game-like experience may attract — and entertain — a certain audience, the movie delivers more than just thrills and action movie heroics. As Schofield and Blake encounter the shellshocked and wounded, walking over corpses as if they were stepping stones, the hellishness and futility of war cannot but hit home, even for the most hardened of gamers, inured to violence by a daily dose of blasting life-like enemies with machine gun fire.

Whether some of these young viewers see these scenes of the aftermath of war as a bit of a hard sell is probably a measure of the culture’s comfort with plumbing violence for entertainment value. Amidst the brutal honesty about the horrors of war are also poignant moments in which humanity triumphs, and great sacrifice is made courageously and unselfishly. There are times when the film crosses the line into a schmaltzy sentimentality (an orphan baby being fed with a soldier’s canteen comes to mind) but the movie quickly swings back into an edge-of-your seat action film, with a promise of a heroic ending.

The movie, thankfully, is restrained when it comes to graphic violence, and hints at the guts and gore rather than shows them in all their horror. Cameo appearances from actors Andrew Scott (best known for his role as Moriarty in Sherlock) and Benedict Cumberbatch, who play British officers, give us a glimpse of the gallows humor which must have made life in the trenches bearable.

In one scene, Scott, as Lieutenant Leslie, while giving directions to the two young soldiers, comically mimics the position of a man bent at the waist. When they later see a corpse frozen in the same bent-over position clinging to a barbed-wire fence, his directions become shockingly clear.

The scene recalls an episode in the novelist Ford Madox Ford’s Parade’s End, which similarly juxtaposed the comic with the tragic in his treatment of World War I. The main character, Christopher Tietjens, looks out from his trench at the barbed wire-crossed no-man’s land and sees “three bundles of rags and what appears to be a very large squashed cow,” next to another

“… melodramatic object, the head cast back to the sky. One arm raised in the attitude of, say, a Walter Scott Highland officer waving his men on. Waving a sword that wasn’t there … That was what the wire did for you. Supported you in grotesque attitudes, even in death.”

The grotesquely comic scenes serve as a reminder of the incongruity of man’s technological advances being put to such a pointless use as the killing of the 40 million soldiers and civilians who perished in World War I.

Whether the adrenaline junkies looking to replicate video game thrills in the movie theater will be moved by the tragedy is a question worth asking at the next family dinner.

1917 is playing in theaters beginning on January 10.