This stained glass window is larger than a tennis court

York Minster's Great East Window is made up of 311 panels depicting passages from the Bible and historical Church figures.

York Minster’s Great East Window has long stood as the largest medieval work of stained glass in the world. If the panels were laid out over a tennis court, they would cover the whole thing and more.

For the last 12 years, the work — which depicts the biblical counts of Creation and the Apocalypse — has been undergoing a massive restoration effort. The team took such a long time to complete the restoration because the 600-year-old stained glass had to be removed slowly and handled with the utmost care.

Now, the team of dedicated professionals has announced that the process should be completed in May 2020. The work was undertaken by York Glaziers Trust, who meticulously went through all 311 panels of the historic window. The project also undertook the conservation or replacement of nearly 2,500 stones by York Minster’s stonemasons. The entire restoration cost about  £15m, as part of the York Revealed project. York Minster is a cathedral of the Church of England; its name reflects its origins as a Catholic monastery.

On the York Minster website, they note that the project was the first European restoration to install “state-of-the-art UV resistant protective glazing” which is meant to protect the ancient glass work and hopefully keep it looking fresh for centuries to come.

Although the work is just about complete, they have other measures they can take to protect the window. York Minster relies on donations for further work, so if you’re interested in supporting their efforts, donations can be made through the York Minster website.

Click the slide show below to see some of the beautiful stained glass panels that will be revealed in their restored glory in May. 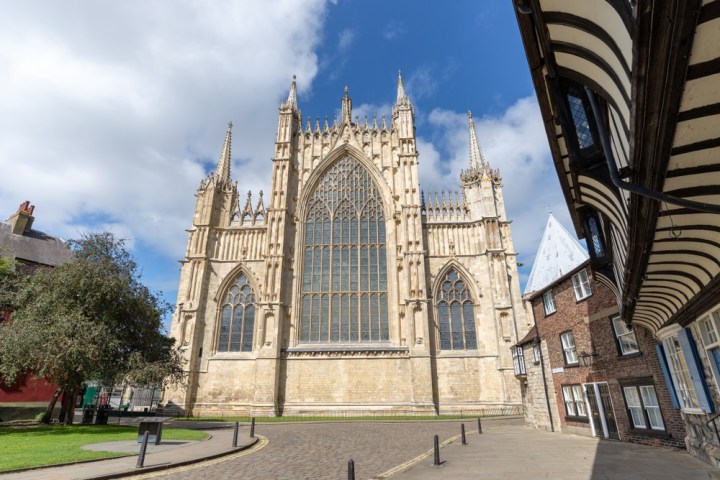