Book of legends about St. Francis has influenced our view of him for centuries 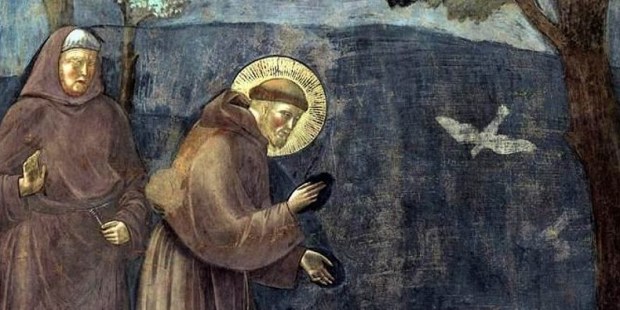 The Fioretti, or Little Flowers, is full of delightful stories about the poverello and his companions.

Why is St. Francis of Assisi often portrayed with a bird in his hand? The answer can be found in the book known as the Fioretti.

Rendered in English as the “Little Flowers,” the Fioretti is a collection of legends and folklore that sprang up after St. Francis’ death. Some of the best known stories from the collection have to do with the saint’s interaction with animals.

In Chapter 16, we read that one day, while Francis was traveling with some companions, they happened upon a place in the road where birds filled the trees on either side. Francis told his companions to “wait for me while I go to preach to my sisters the birds.” The birds surrounded him, intrigued by the power of his voice, and not one of them flew away.

The Poverello then blessed the birds, and their congregation split into the four corners made by the cross. The winged creatures then took to the air in four groups, flying off to the north, east, south and west.

For the friars, this signified that “the preaching of the Cross of Christ, renewed by St. Francis, would be carried by him and his brethren over all the world and that the humble friars, like little birds, should possess nothing in this world, but should cast all the care of their lives on the providence of God.”

According to the Catholic Encyclopaedia, the Fioretti have been described as “the most exquisite expression of the religious life of the Middle Ages.”

“That perhaps which gives these legends such a peculiar charm, is what may be called their atmosphere; they breathe all the delicious fragrance of the early Franciscan spirit,” the encyclopedia says. “Nowhere can there be found a more childlike faith, a livelier sense of the supernatural, or a simpler literalness in the following [of] Christ than in the pages of the Fioretti, which more than any other work transport us to the scenes amid which St. Francis and his first followers live, and enable us to see them as they saw themselves.

“These legends, moreover, bear precious witness to the vitality and enthusiasm with which the memory of the life and teaching of the Poverello was preserved, and they contain much more history, as distinct from mere poetry,” the encyclopedia continues. “In Italy the Fioretti have always enjoyed an extraordinary popularity; indeed, this liber aureus is said to have been more widely read there than any book, not excepting even the Bible or the Divine Comedy.”

Its influence has come down to the present day. The text was the inspiration for the 1950 film Francesco, giullare di Dio (“Francis, God’s Jester”) which was co-written by Federico Fellini. It was also used as a source for the libretto of Olivier Messiaen’s opera Saint-François d’Assise.