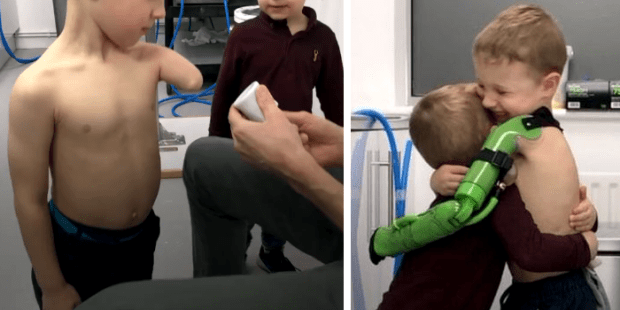 His mother found someone through social media who could create the right prothesis for her son.

It was only at the age of 5 that Jacob Scrimshaw was able to perform one of the simplest, most enjoyable and sublime gestures that a human being can experience in life: embracing the people he loves. Thanks to a prosthetic arm, the little Englishman was finally able to hug his own little brother.

Jacob was born prematurely, with his left arm incomplete. As the British public health system does not provide prosthesis in cases where the arm ends above the elbow, Jacob’s parents, Gemma Turner and Chris Scrimshaw, resorted to crowdfunding on the internet to raise the £16,000 (about $21,000 USD) needed to design a functional prosthesis specifically for their son.

The project was carried out by Ben Ryan, a resident of Wales, whom Jacob’s mother discovered on Instagram, according to Metro. He had created a hydraulic prosthesis for his own son Sol when, at the age of just 10 days old, he had to undergo an emergency amputation. At the time, Ryan gave up his job as a psychology teacher and dedicated himself to successful research that led him to found a specialized company—Ambionics—which today works in partnership with the Polish prosthesis manufacturer Glaze Prosthetics.

Interviewed by the BBC, Ryan explained that prosthetics are printed in 3D and “forged together in nylon powder using lasers.” In the hydraulic prosthesis designed especially for Jacob, the elbow can be adjusted in various positions and the modular claw and hand mechanism can be replaced by other tools, at the request of the boy’s parents.

The very functional prosthesis has left Jacob’s parents highly satisfied, but for the boy, the most exciting thing is that it’s green and big like “a superhero arm,” and the fact that with his “new arm” he can now hold his little brother’s hand and hug him.