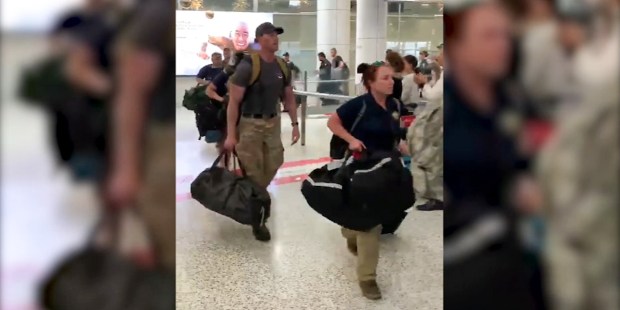 A moving video of many Aussies’ showing their deep appreciation.

The Australian wildfires have been raging for months and while the world desperately looks on, firefighting crews from around the world have been preparing their equipment to fly to the southern hemisphere and lend a much-needed hand.

This week, 20 firefighters from the Angeles National Forest arrived at Sydney International Airport after a long journey to help their Australian counterparts, who are worn out after months of trying to rescue people, wildlife, and land. Their arrival brings the total number of American firefighters to over 150 men and women who are sharing their courage, strength, and expertise to help during these horrific fires.

It’s a reciprocal relationship that has developed over the years, that saw a similar number of Australian firefighters come to the rescue of Californians during the fires of 2018. With another 100 American firefighters expected to arrive in the coming days, we hope and pray these remarkable men and women can make a powerful impact in extinguishing the fires.

Australians are deeply appreciate, as shown in this video when members of the public at the airport showed their gratitude to the new arrivals:

US fire fighters arrived at Sydney Int Airport this week, on their way to assist with fire fighting in Victoria.
Coming through, all gathered gave a spontaneous & lengthy round of applause, reflecting the gratitude & admiration we all have for their generosity. #NSWRFS @NSWRFS pic.twitter.com/5epg5y4qxX

Read more:
How to help Australia: Pray to these holy intercessors

Read more:
Why a 9/11 firefighter became a priest