The heart of Catholic India is in the state of Goa 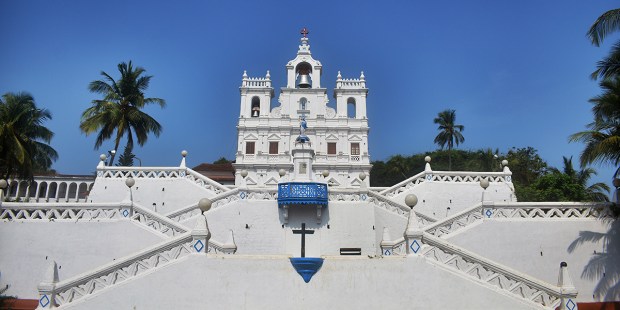 Goa became Catholic by way of Portuguese missionaries, but it also has a Christian history stretching back to Apostolic times.

St. Thomas the Apostle is known as a great evangelizer of India, but another Apostle, St. Bartholomew, is also credited in bringing the Gospel to the subcontinent.

The Roman Martyrology says that St. Bartholomew preached the Gospel in India.

It is believed that Bartholomew reached the Konkan Coast, the rugged section of the western coastline of India, in the 1st century. According to Butler’s Lives of the Saints, Eusebius, in the early Fourth Century, says that St. Pantaenus, about a century earlier, found in India people who still showed him a copy of St. Matthew’s Gospel, “which they assured him that St. Bartholomew had brought into those parts.”

But it wasn’t until after Portuguese explorer Vasco da Gama visited the west coast of India in 1498 that widespread evangelization got underway.  From the year 1500, missionaries of the different orders (Franciscans, Dominicans, Jesuits, Augustinians, etc.) accompanied the colonists and began to build churches along the coast districts.

When the Portuguese came to India, one of the things they set as a priority was to remove Nestorianism from the Christianity practiced by the so-called “Thomas Christians” on the Malabar and Coromandel coast and bring the community into union with the Catholic Church. This was accomplished by the Synod of Diamper in 1599.

Portuguese missionary activity resulted in large Christian communities formed in the south of India and as far as Madras on the east coast, and Damão on the west, while sporadic efforts were made from time to time further northwards, as far as Bengal, Agra, and even Tibet. The chief successes were, first, within the strictly Portuguese territory of Goa.

According to the Catholic Encyclopaedia, the decline of Portuguese power in the 17th century also meant a decline in the supply of missionaries. Therefore, the Holy See began to send out missionaries independently of Portugal—appointing vicars Apostolic over several districts. In certain places where vicars Apostolic came into contact with the Portuguese clergy, there arose a conflict of jurisdiction. This was particularly the case in Bombay, which had been ceded to the British in 1661. Here, the Portuguese clergy were at first allowed to remain in charge of the churches, but in 1720, on the ground that they caused disaffection among the people against the British power, they were expelled from the island, and the Vicar of the Great Mogul, with his Carmelite missionaries, was invited to take their place.

The Holy See did not deny or abrogate the ordinary jurisdiction of the Archbishop of Goa, but merely intended to make a temporary provision till such time as the British Government should allow the Portuguese clergy to return. Efforts were made from time to time on the part of the Goan party to recover their place, and this ultimately, through a division of the churches in 1794, gave rise to the existence of two rival jurisdictions in Bombay—Padroado and Propaganda.

After the revolution of 1834 in Portugal, the expulsion or abolition of the religious orders, and the severing of diplomatic relations with the Vatican came the famous Brief “Multa praeclare” on 24 April, 1838 provisionally withdrawing jurisdiction from the three suffragan sees of Cochin, Cranganore, and Mylapore, and assigning their territories to the nearest vicars Apostolic — at the same time implicitly, or at least by subsequent interpretation and enactments, restricting the jurisdiction of the Archdiocese of Goa to actual Portuguese territory. This Brief was, however, rejected by the Goan party as spurious or at least surreptitious, since they contended that even the Holy See could not rightly legislate in this manner without the consent of the King of Portugal, as was declared in the original Bulls of foundation, etc. … The resistance which followed, both in Bombay and in other parts of India has uniformly been called the “Goan or Indo-Portuguese Schism.”

Nevertheless, Goa today has a reputation as a small place that has produced many priests and bishops in the Church. Fr. Joaquim Loiola Pereira, secretary to Archbishop Filipe Neri da Rosario Ferrao of Goa and Daman, told Crux that Goa’s abundant priestly vocations stem in part from the practice of families in the region traditionally “offering one child to God.” Retired Archbishop Raul added that it also relates to a different system of praying in Goa. In the past, he said, Catholics in Goa would pray to God to help them fulfill God’s wishes, whereas today they ask that God help them carry out what they see as their mandate in life.

Goans have emigrated to many parts of the world, and often bring their faith and religious customs with them. A visit of a relic of St. Francis Xavier to Vancouver, British Columbia brought out many local Goans

The saint and missionary is credited for bringing Catholicism to Goa, and while his arm (which was said to have baptized thousands) is kept in Rome, the rest of his body is buried in that Indian state, according to the B.C. Catholic.

“Had it not been for St. Francis Xavier, we would not have been Catholics,” parishioner Cleto Dos Remedios told the newspaper.