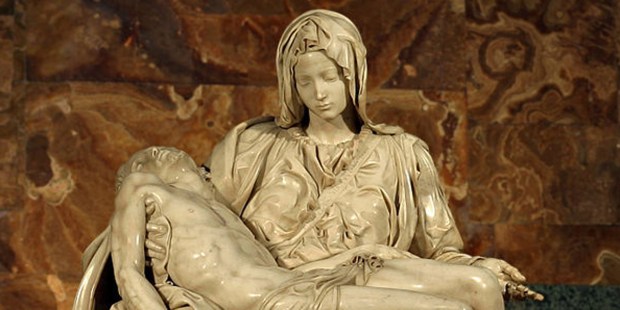 The most moving sculpture in Catholic art has a very interesting history.

Out of the all the finest works of sculpture completed by Michelangelo, the Pietà is probably the one held most dear by Catholics. A lifeless Jesus is depicted in pose of spiritual abandonment  on the lap of an angel-faced Mary.

The whole composition evokes a deep sense of sorrow, symbolizing the very virtue after which it is named (piety, which may also be translated as pity or compassion). But not many Catholics may know that the Pietà traveled to New York in 1964 or that it was almost destroyed by a vandal in 1972. Here are some little-known facts about one of the most moving works of Catholic art.

1. It was commissioned by a French cardinal

French cardinal Jean de Billheres, who was looking for “the most beautiful work of marble in Rome” to ornate his tomb, commissioned a 24-year-old Michelangelo to create the Pietà. De Billheres choose a theme that was then popular in Northern European art, that of Mary weeping over her dead son moments after he was taken down from the cross. This was probably the first work of sculpture taken on by Michelangelo where human emotions played such a central role, in contrast to some of his other masterpieces, including the David, where humans are presented in a more detached pose. The end result was a moving work that did indeed become the “most beautiful work of marble in Rome” as requested by his commissioner.

2. The Pietà is the only sculpture signed by Michelangelo

The Pietà is not only Michelangelo’s most famous sculpture, it’s also the only one that the master signed. By taking a closer look at Mary’s clothes, visitors will be able to see the artist’s name engraved just below her chest. As explained by art historian Giorgio Vasari, Michelangelo decided to sign his work after overhearing passersby attributing it to another sculptor. One night, Michelangelo reportedly showed up with a light and a chisel to make sure that no one would ever question the true authorship of the Pietà.

3. It was carved from a single piece of Carrara marble

The majestic Pietà, measuring 5′ 9″ x 6′ 5″, was carved out of a single piece of white and blue marble from the famous caves of Carrara, in Tuscany. The marble block was extracted by executing a deep cut in the marble cave, in which metallic chisels were later inserted.

4. It was moved to St. Peter’s Basilica 200 years after its creation

For its first 200 years, the Pietà’s home had been the Chapel of Santa Petronilla, a mausoleum near St. Peter’s which was chosen by Cardinal de Billheres as his final resting place. In 1699, it was moved to its current location inside St Peter’s Basilica.

In 1964, US Cardinal Francis Joseph Spellman asked Pope John XXIII to display the Pietà as part of the 1964–65 New York World’s Fair. The Vatican agreed, appointing Edward M. Kinney, Director of Purchasing and Shipping of Catholic Relief Service, to manage the logistics. Thousands of Americans and trade fair visitors were thus able to see the statue firsthand, safely located behind a massive plexiglass barrier weighting more than 4,900 pounds.

6. Critics deemed Mary as “too young”

When the statue was completed in 1499, critics noted that Mary looked very graceful but way too young for a woman who was the mother of a 33-year-old man. Michelangelo himself reportedly defended his design choice in his biography: “Do you not know that chaste women stay fresh much more than those who are not chaste? How much more in the case of the Virgin, who had never experienced the least lascivious desire that might change her body?”

7. It was almost destroyed

On Pentecost Sunday in 1972 Laszlo Toth, a mentally unstable man from Hungary, jumped over the railings of St. Peter’s Basilica and unleashed a furious attack against the Pietà. He hit the statue with a hammer while shouting “I am Jesus Christ; I have risen from the dead!” Before being stopped by security officers, Toth was able to inflict 15 bows to the statue, knocking off Mary’s left arm, the tip of her nose and her cheek. The statue has since been seamlessly restored.