Exclusive photos: The 10 most beautiful churches in Manhattan

Take a tour of some of New Yorks City's greatest treasures.

It’s doubtful that when St. Isaac Jogues celebrated the first known Mass in New York City — for a congregation made up of a whopping two other Catholics in Manhattan back in the 1640s — that he could have envisioned what the future would bring. Not in his wildest dreams could he have pictured what the “tiny” 22-square-mile island would look like three centuries later.

The history of the Catholic Church in New York has been tumultuous, to say the least. From the early days of staunch anti-Catholicism and the battle for religious liberty, to the millions of Catholic immigrants from every corner of the earth who inundated the city, creating a uniquely diverse Catholic culture — if there’s one thing that can be said, it’s that there’s no place like New York. 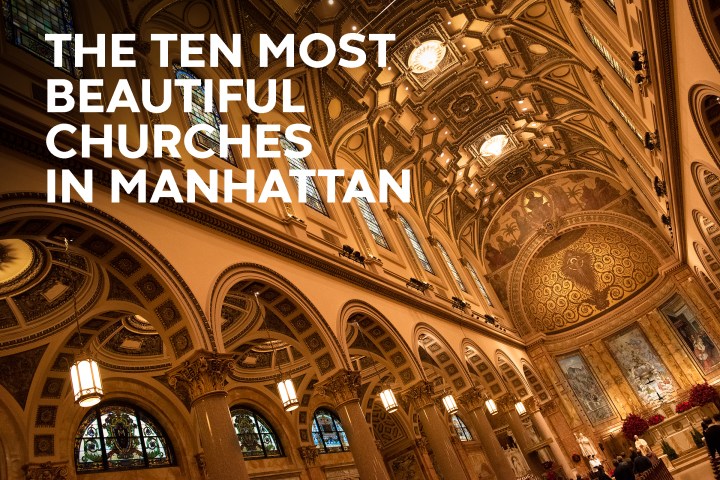 Since the early 1800s, along with the creation of the first New York diocese, the growth of the Church has been explosive. The century saw the creation of over two-thirds of the 114 churches that stand today, many of which are still vibrant and active, serving today’s generation of Catholics. Churches varied in shape and size and were generally centered on a particular ethnic origin, which was often reflected in the symbolism and the architecture.

Some have incredible depictions of Gospel stories in stained glass or detailed frescoes, and others evoke a deep sense of awe and reverence due to their sheer size. And then with a few of them, it’s all of that and then some … and those are the ones that made this list.

At the end of the day, the underlying beauty of any church is its purpose — that it’s a place set aside for the sacraments. It’s a place for Christ and His people to enter into communion with each other, and it doesn’t have to be a fancy building with stained glass and marble to accomplish that. But as with these 10 iconic churches, what has been built, in a powerful way, points to Whom we worship and guides those who worship through beauty to encounter Christ in an extraordinary way, and there’s something to be said about that as well.

If you happen to be in town and are interested in attending Mass or visiting to pray, here’s the complete list with links to their websites.