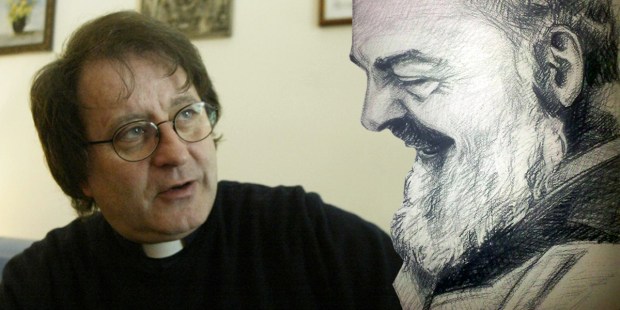 In 1968, young Frenchman Jean Marie Benjamin was in his 20s, living a worldly life in Paris. He had already recorded two records, was composing his first symphony, and was working as a musician in one of the cabarets in the capital. He cultivated a certain interest in spiritual life—reading a few books on the subject and going to church from time to time, but not much more.

A photo of Padre Pio

One evening while at dinner at a friend’s house, he saw a book about Padre Pio with the face of the holy Capuchin friar on the cover. There, he glimpsed something that attracted him so much that he borrowed the book, read it all in one night, and decided to travel to San Giovanni Rotondo, Italy, to meet the extraordinarily captivating priest in person.

At the inn at San Giovanni Rotondo, Jean Marie met an Italian named Marco, a professor of literature who recommended that he to go to the 5 a.m. Mass if he wanted to go to confession with Padre Pio—which would not be easy, because of the influx of hundreds of faithful and because the friar no longer heard confessions from foreigners.

Jean Marie followed his new friend’s recommendation and, the next morning, saw Padre Pio, who was already very old, in a wheelchair, bowed down by the pain of the stigmata of the Passion of Christ.

“It was very moving,” testified the Frenchman to the Catholic news agency ACI Stampa. A particularly intense moment of that Mass was the Eucharistic consecration. “Padre Pio lifted the paten. From that moment on, describing Padre Pio’s Mass is really an impossible undertaking. We don’t have the words, the expressions, the right way to recount what was happening. In a certain sense, nothing happened at all, and yet so many things happened, especially in your soul … I had noted, at the beginning of Mass, that many birds came to the windowsills, probably attracted by the lights in the church. But as soon as Padre Pio began to pronounce the words of the consecration, all the birds stopped singing.”

Jean Marie couldn’t go to confession that day or the next three days. Padre Pio was already very tired and his health seriously weakened. In fact, he would leave this world that same year, just a few months later.

But on Sunday March 8, as soon as the door to the church opened, Jean Marie ran to sit in the front row of those waiting to receive the sacrament of reconciliation.

When it was his turn to confess, Jean Marie heard Padre Pio ask him slowly, as if he knew that the young man did not speak Italian, “How long has it been since your confession?”

The musician started to explain his story a little in French, but the holy friar repeated the question. Jean Marie answered that he couldn’t remember how long it had been.

“Padre Pio raised his hand, moved it back and forth three or four times, making a noise that sounded like a long ‘no.’ Then he told me the day, the month and the year of my last confession. It had been on July 13. Then I remembered: I’d gone to confession in Ivory Coast, during a trip to Africa with my parents.”

After a long silence, the young man asked for Padre Pio’s blessing, who, looking deep in his eyes, told him, “Go see a French priest.”

Jean Marie touched the saint’s stigmata and felt warmth flow into him, and the strong presence of God. He returned to Paris renewed by what he described as “a new force” within him.

When, on September 23 of that year, the news arrived that Padre Pio had died, Jean Marie cried. He remembered that the friar had told him to go to confession with a French priest; he had not done so until then—he hadn’t even thought about it again.

“I decided to take a subway to get off at a random station, go out, walk, and enter the first church I found on the street,” he told ACI Stampa.

He entered the first church he found in the vicinity of Nôtre-Dame des Victoires, where he found two confessionals with priests but not penitents, entered one of them and told the priest, “I don’t know how to confess my sins, but I come sent by Padre Pio.”

The priest listened Jean Marie’s story, and answered him: “What’s happened to you is very beautiful. If I understood you properly, no one had given you my name for you to come and see me. It was certainly Padre Pio who guided you. Do you know why I am saying this? Because I’m Father Reveilhac, and I’m responsible for collecting funds in France for the House of Relief from Suffering, which is Padre Pio’s hospital. I’ve been going to San Giovanni Rotondo twice a year for 30 years, and I’ve seen Padre Pio every time.”

The maturing of a vocation

Father Reveilhac became the spiritual director of Jean Marie Benjamin. As he grew in faith and spiritual life, the young man felt the call to the priesthood, but his director asked him to wait, because his vocation was not yet mature.

“In time, I understood that Father Reveilhac was right. I didn’t know if I could’ve changed my lifestyle immediately, leaving music, composition, the recording studio, and the shows,” he says.

Little by little, Jean Marie got involved in other activities. From 1983 to 1988, he worked at the United Nations Office in Genoa, where one of his responsibilities was to organize events for the United Nations Children’s Fund (UNICEF).

In March 1988 he returned to San Giovanni Rotondo, and there confirmed his decision to become a priest.

A future he never had imagined

He was ordained to the priesthood on October 26, 1991, and from that year until 1994, was assistant to the Italian Cardinal Antonio Casaroli, the Vatican’s special envoy for diplomatic missions and Secretary Emeritus of the Vatican State.

In 1995, he produced his first film about Padre Pio, broadcast by Italian Radio and Television (RAI).

In 1998, he produced a documentary in Iraq on the country’s ancestral cultures and witnessed the tragedy of the Iraqis who were victims of the radiation from uranium used in American and British weapons, which led him to focus on humanitarian work and the denunciation of that dramatic situation to the media.

Between that year and 2003, he returned to the country several times. Three books and two documentaries report what he saw and lived during those trips.

In 2003, he organized the meeting between Pope St. John Paul II and the Iraqi Prime Minister Tareq Aziz, in Italy.

Even today, Fr. Jean Marie Benjamin is dedicated to humanitarian work in Iraq.

Read more:
5 Thoughts from Padre Pio on the Rosary