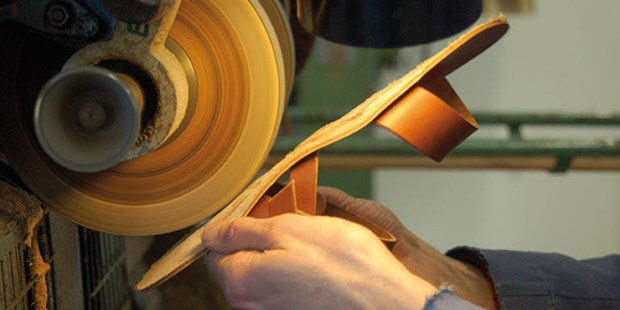 The French monks who make them cannot keep up with worldwide demand.

The new year has barely started, but the Benedictine monks of La Gard Monastery, France, are already backed up with an abundance of orders for their popular hand-crafted sandals.

Since their founding in 2003, the brothers of the Monastery of St. Mary of the Guard have been developing their talents as shoe makers. It has taken them nearly 20 years to perfect their modest monastic sandal, but now the fruits of their labors have been reaped and they have become a worldwide sensation, with orders coming in from as far as Japan.

They offer three different styles of sandal, one for men and two for women. The men’s sandal, which they call the Benoît, in honor of the founder of their order, is a simple black sandal with thick straps. The women’s line includes the Scholastique, named for St. Scholastica, which is similar to the Benoît, but in red, as well as a more elegant sandal with several thin straps called the Hildegarde, named for St. Hildegarde of Bingen.

The Benedictine monks craft all the shoes themselves on the monastery property. Teller Report notes that they get their resources from the surrounding region in order to stimulate the economy and receive their raw materials promptly, although they outsource to Italy for the rubber soles.

While in the workshop, the tonsured monks don blue robes, which look a bit like denim. The work area is surrounded by images of the Holy Family and the saints of their order. There, before these holy images, they work as a team to craft about 30 pairs of shoes each week, but at this pace they cannot hope to keep up with the demand for their high quality sandals.

The Benedictines at La Gard received so many orders that they’ve had to refuse some of them. In an interview with Teller Report, Father Hubert explained:

“The work is organized in such a way that it can be spread throughout the year while keeping our monastic rhythm, by organizing itself upstream, even if it means refusing resellers.”

Their limits, however, can be worked around. One of the younger monks, Brother Augustin, noted that the work is manual, which frees the spirit to conduct prayer. It is suggested that while the sandals are being prepared, there are many prayers said over them, but this added bonus to your purchase comes gratis.

Those who are interested in buying a pair of the Benedictines’ fine sandals can do so at the monastery, which is open to customers for several hours each day, or they can shop online at Abbaye de Barroux, an online bazaar that carries products from many monastic communities.