Archaeologists search for the grave of St. Edmund under tennis courts 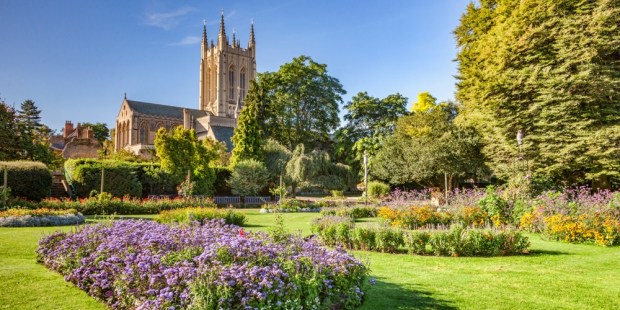 Renovation of the Abbey Gardens tennis courts has led to an effort to study the historical site.

Amidst the celebration of the 1,000th anniversary of the foundation of the Abbey of St. Edmund in the town of Bury St. Edmund’s, an archaeological study of the grounds has led to excitement about the possible discovery of the resting place of St. Edmund, the first patron saint of England.

Aleteia’s own John Burger explains why we know so little about St. Edmund’s final resting place:

England’s former patron saint, who ruled the Anglo-Saxon realm of East Anglia between 855 and 869, is thought to have been captured and killed by Danish or Viking raiders in 869. According to the East Anglian Daily Times, his remains were kept in a shrine in Bury. But the Benedictine Abbey there was dissolved during King Henry VIII’s reign, and Edmund’s remains were lost.

The focus of the study will take place under the Abbey Gardens tennis courts, which are rumored to cover the grave of St. Edmund. The Abbey of St. Edmund Heritage Partnership is expected to apply for grants to pay for the work, which will include archaeological supervision of the tennis court renovations, as well as geophysical scans of the ground under them in order to view potential archaeological finds without disturbing the site.

Ipswich Star reports that the effort is expected to take about 5 weeks, which is as long as the beautification efforts are due to last. The English news outlet spoke with the Reverend Canon Matthew Vernon, chairman of the Heritage Partnership, who explained:

“While our scan would include the site of the old tennis courts, its purpose is to further the research and discover more about what structures, artefacts and other links to the Abbey’s medieval past may lie beneath a much larger part of the former Abbey.”

The Abbey Gardens are just a third of the land that was once owned by the Abbey of St. Edmund. If the study of the land does not yield the location of St. Edmund’s tomb, it is possible that it could be located somewhere else on the property, which once stretched over a good portion of what is now the town.

Joanna Rayner, West Suffolk Council cabinet member for leisure and culture, noted that any discovery at the site — be it the tomb, some other ancient structure, or even a small artifact — would be an honor to find during the celebration of the Abbey’s 1,000th anniversary. She said:

“While we have much history and heritage to be proud of already, there is so much more that we hope to discover in 2020 and it looks like it could be a very exciting year ahead.”