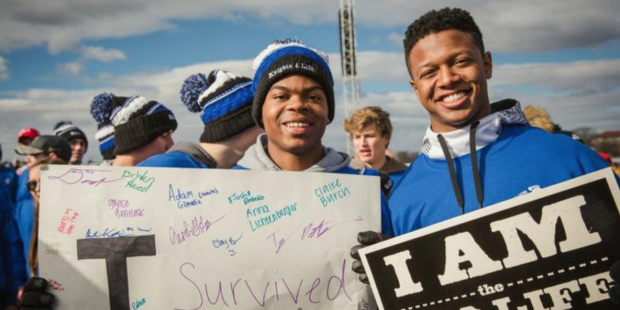 President Trump became the first president to attend the march, pledging to the crowd to “defend the dignity and the sanctity of every human life.”

President Donald Trump became the first president to speak at the March for life, when he addressed a rally on Washington’s Mall today pledging to fight for the rights of the unborn.

“All of us here understand an eternal truth: Every child is a precious and sacred gift from God. Together, we must protect, cherish, and defend the dignity and the sanctity of every human life.,” he said in his remarks on the occasion of the 47th March for Life, which marks the anniversary of the 1973 Roe v. Wade decision which made abortion a constitutional right.

In his address, Trump thanked the “tens of thousands of high school and college students who took long bus rides to be here in our nation’s capital,” and listed his administration’s efforts to advance the pro-life cause.

Viability (n.): the ability to live, grow, and develop. "Someone called my radio show once and said, 'I think a fetus isn’t a person because it’s not viable.' I said, 'Well, it is viable. The unborn is viable in the womb until at least about 20 weeks, but they’re viable where they can live.' That [would] be like if a Martian teleported us to Mars, and then what would happen?… [W]e would asphyxiate because the Martian atmosphere doesn’t support life – and the Martian said, 'See, the Earthlings? Not persons. They’re not viable.' Well, we are viable on Earth, not Mars. We’re still persons. The unborn are viable in the womb." -Trent Horn. _______________ #whywemarch #LetThemLive #Viability #Live #Grow #Develop #prolife #abortion #SLEDtest #LifeEmpowers #marchforlife

“At the United Nations, I made clear that global bureaucrats have no business attacking the sovereignty of nations that protect innocent life. Unborn children have never had a stronger defender in the White House,” he said.

Trump also cited his appointment of “187 federal judges, who apply the consultation as written, including two phenomenal supreme court justices – Neil Gorsuch and Brett Kavanaugh,” in his speech, which preceded the march.

As many as 100,000 are estimated to be taking part in the march, which will conclude at the steps of the United States Supreme Court.

Former presidents Ronald Reagan and George W. Bush addressed the event by phone, and Trump became the first to speak to the event by satellite video feed in 2018.