From the Wadi Rum desert to the Red Sea: A trip of biblical proportions

The promise God made to Abraham, “as the stars in the sky and as the sand on the seashore,” comes to life while traveling around Jordan.

Moses is a constant, unavoidable presence in Jordan, just like Elijah, John the Baptist, and Jesus are. But whereas the latter three—for reasons those who are acquainted with the Bible will immediately understand—are more related to the Jordan river and its surroundings, Moses is a central presence both on the Jordanian shores of the Red Sea and in the Wadi Rum desert, further east of the sea. As one walks the portion of the Jordan Trail (a 400-mile walking path that covers the whole country, north through south) that crosses the desert, one arrives at the Bedouin village of Titen. From there, following the shepherd’s paths, one can already get a glimpse of both the Red Sea and the Sinai. One is indeed seeing the very same sights Moses himself saw.

It is no exaggeration to say that as one travels around the country, Moses is virtually everywhere. Not only the Wadi Mousa (that is, “the Valley of Moses”) but also Ain Mousa, “the well of Moses,” just to name a couple of places named after the law-giving prophet. Biblical tradition has traced the path Moses walked when he crossed the country, from the Red Sea in the south all the way to the north to Mount Nebo, while on his way to the Promised Land.

But when one visits Southern Jordan, the central part of the Exodus, the parting of the Red Sea, comes to life. From the sandy and sunny beaches of Aqaba by the Red Sea—a tourist city par excellence, with its luxurious resorts, generous restaurants, and scuba-diving schools—one can perfectly well see Egypt. It is difficult not to imagine the sea being parted in half and Moses approaching one’s table walking from the other shore. In fact, one can take a ferryboat from Aqaba to Nuweiba, in Egypt, and back. Depending on the ferry one chooses, the trip can take either one or three hours. It surely must have taken Moses a bit longer than that.

Whereas the Dead Sea might have been a better-known tourist destination, Aqaba and the Jordanian shores of the Red Sea are becoming more and more popular, not only because its waters host some of the most productive and diverse coral reefs in the world, but precisely because of its spiritual, religious value. It is, for sure, a tourist attraction. But it is also a pilgrimage site.

Of course, what neither Moses nor Aaron nor any other legendary pilgrim ever dreamed of doing was riding in a jeep across the magnificent Wadi Rum desert at sunset, discovering ancient petroglyphs dating back more than 10.000 years. Now, every visitor can do it, riding in the back of a jeep driven by locals, who might even take the tourist/pilgrim for tea or coffee in a Bedouin tent—not to mention the many glamping options available.

Read more:
This is the most intriguing (and revealing) map of the Holy Land

The Wadi Rum got its name from the Romans. The area was directly under Roman rule during Trajan, although the Decapolis was built during the Hellenistic Period. But although “Rum” literally translates as “Roman,” the word also refers in general to Byzantine Christians. The desert, however, is also known as the “Valley of the Moon,” the Wadi Al-Qamar, and for good reason. Contemplating the stars (and the Milky Way) while drinking tea in this magnificent desert in the middle of the night, enjoying the proverbial hospitality of the Bedouins, certainly makes one remember the promise God made to Abraham: “I will multiply your descendants beyond number, like the stars in the sky and the sand on the seashore.”

Here, in Jordan, all these biblical references come alive.

Make sure to visit the slideshow for some magnificent vistas of both the sea and the desert! 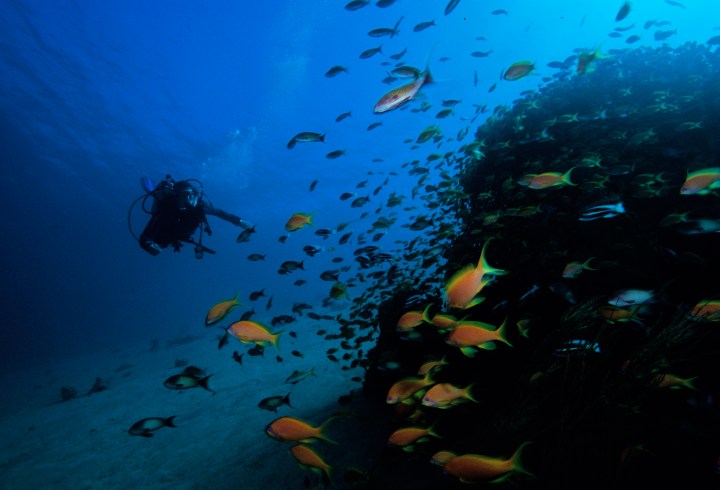