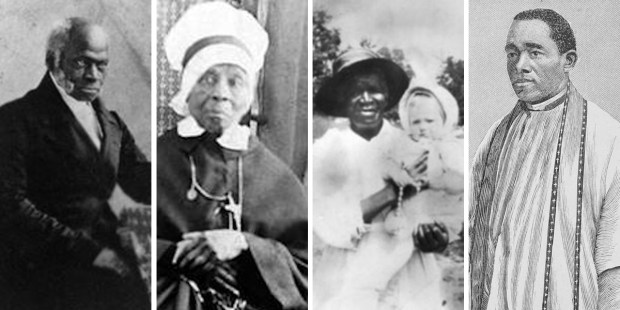 There are dozens of African saints, but one of these 6 is likely to be the first canonized African American.

Black History Month is a good time to investigate black Catholic history. Christianity has been present in Africa since its inception, likely brought back to Libya by St. Simon of Cyrene. Through the centuries, there have been dozens of black saints from Africa, Europe, and South America.

As yet, not a single African American Catholic has been canonized, but that should change in the next few decades, as six different Americans of African descent have open causes for sainthood.

Venerable Pierre Toussaint (1766-1853) was born a slave in Haiti, where he was baptized Catholic. He was brought to New York City, where he was apprenticed to a hairdresser. When offered his freedom, Toussaint refused so that he could continue to support his mistress financially. On her death he was freed and four years later married Juliette Noel. They adopted his niece, took in orphans, and had many foster sons. The Toussaints were philanthropists and leaders in the black community, helping to found the first Catholic school for black children in New York, establishing a credit bureau and employment agency, and nursing cholera patients. A daily communicant, Toussaint was the first layperson to be buried beneath the main altar at St. Patrick’s Cathedral.

Servant of God Mary Elizabeth Lange (1794-1882) was born in a free French-speaking community in Cuba, the granddaughter of a well-to-do plantation owner, but moved to the United States as a child. Very well-educated and of independent means, Lange started a school for free black children in Baltimore, where the first public schools serving black children wouldn’t be opened until after the Civil War. She founded the Oblate Sisters of Providence, the first American order for women of color. Though primarily founded to educate African-American children, the order also nursed the sick, cared for the elderly, and did anything else the community needed. By 1860, they were running all the Catholic schools for children of color in Baltimore.

Venerable Henriette DeLille (1813-1862) could have passed like her mother and siblings. But DeLille wanted to show other free women of color that their lives didn’t have to be dictated by the racist system they had been born into. While DeLille’s mother wanted her to live as the concubine of a rich white man, as she herself had done, DeLille chose Christ. She began a religious order of women of color to serve the elderly. Though many Church and state officials in Louisiana opposed a religious order of African American women, her small group of educated black women eventually became the Sisters of the Holy Family.

Servant of God Julia Greeley (d. 1918) was born into slavery in Missouri between 1835 and 1848. When she was a child, a slavemaster caught her eye with a whip and destroyed it. After she was freed in 1865, Greeley eventually made her way to Denver, where she converted to Catholicism and became a daily communicant. She lived very simply, giving away all she could and begging on the street to be able to provide more for the poor. To honor their dignity (and preserve her anonymity), she worked after dark, dragging a little red wagon filled with provisions all around the city. Greeley loved the Sacred Heart and firefighters; she visited every fire station in the city each month to give them pamphlets about the Sacred Heart. Greeley walked for many miles each day, despite severe arthritis. Though she had lived a humble and hidden life, more than 1,000 people came to mourn her death.

Venerable Augustus Tolton (1854-1897) was the first African-American Catholic priest to acknowledge his African heritage publicly. Born into slavery, Tolton and his family escaped to Illinois, where he discerned a call to the priesthood, despite the racism he endured from white Catholics. But while his pastor supported his vocation, Tolton was rejected by every American seminary because of his race. Finally, he was accepted at a seminary in Rome and prepared to serve in the African missions as the American bishops were quite sure that the American Church wasn’t ready for black priests. But Rome saw differently, and Fr. Tolton was sent first to Quincy, Illinois, and then to Chicago where, despite constant struggles with prejudiced clergy and laity, he served his people tirelessly, dying of exhaustion at only 43.

Servant of God Thea Bowman (1937-1990) was born into a Methodist family but her experience at Catholic school led her to convert to Catholicism at age nine. At only 15, Bowman entered the Franciscan Sisters of Perpetual Adoration, the only black Sister in the community. Sister Thea went on to teach all ages, eventually getting her doctorate and becoming an English professor. She was a powerful voice against racism and eventually began to work full-time in black Catholic ministry, explaining the beauty of African American Catholic spirituality to individuals as well as to the United States Conference of Catholic Bishops. She died of breast cancer at only 51.