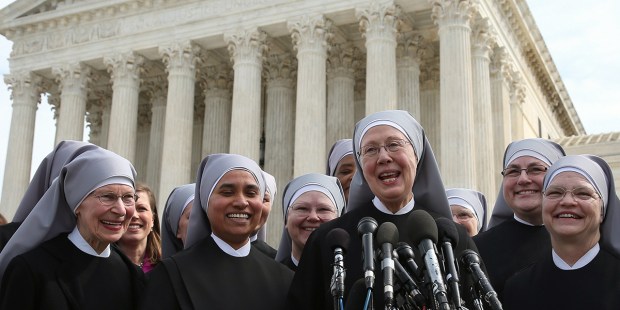 Case to be heard in April will examine whether Religious Freedom Restoration Act applies.

As Obamacare nears its 10th anniversary, there continue to be legal battles over implementation of a rule that grew out of the Affordable Care Act.

The 2010 law included a section that requires coverage of preventive health services and screenings for women. The following year, the Obama administration required employers and insurers to provide women with coverage at no cost for all methods of contraception approved by the Food and Drug Administration. The so-called “contraceptive mandate” carried an exemption for houses of worship, but not faith-based institutions.

The Little Sisters of the Poor became a high-profile litigant in fighting the requirement. Although they operate elderly care homes and employ mostly lay people, they were vindicated in their claim that they should not have to pay for or facilitate insurance policies that cover devices and practices that are contrary to Catholic teaching.

Now, the Little Sisters are headed back to the Supreme Court. Represented by Becket, a nonprofit religious liberty law firm, the Sisters argue that the high court has never definitively resolved the question of whether forcing religious objectors to provide health plans that include contraceptive coverage violates the Religious Freedom Restoration Act (RFRA).

The 1993 RFRA says that government requirements placing a substantial burden on religious practices are subject to an exceptionally demanding form of judicial scrutiny.

In 2017, the Trump Administration issued Interim Final Rules that expand exemptions from the contraceptive mandate for organizations, colleges and businesses that have religious or moral objections to furnishing coverage for employees (or enrolled students), as well as for employees who object to having such coverage. But several states have sought to invalidate the final rules. Becket pointed out that a nationwide injunction against the final rules is based on the theory that RFRA and the Affordable Care Act “not only do not require, but do not even allow, the religious exemption rules.”

“It is clear that the litigation will not end unless and until this Court provides definitive guidance on the RFRA question,” says Becket’s application for review by the Supreme Court.

But the Trump administration argues that the new exceptions were authorized by the Affordable Care Act and required by RFRA.

The case will probably be heard in April and decided by the end of June.