A prayer book used by St. Francis of Assisi goes on display in Baltimore 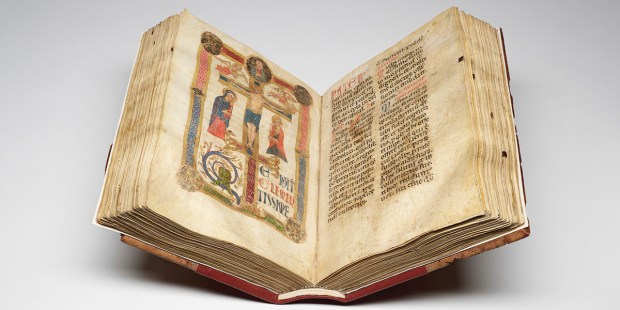 The missal is said to be the one consulted by the saint and his followers to understand God’s will for them.

In the year 1208, St. Francis of Assisi and two followers reportedly were debating what God’s plan for them might be. Unable to agree, they sought answers at the Church of San Nicolò in Assisi, where Francis often attended Mass. They opened the Missal, which sat on the altar, and the text on the page they turned to urged renouncing earthly goods.

A second time, they opened to a random page, and another passage regarding the renunciation of worldly goods appeared.

A third time, they opened at random. The same message appeared.

“This pivotal moment laid the foundation for the Franciscan order,” says The Walters Art Museum in Baltimore, which has just put the missal on public display. “Due to this possible contact with the saint, Franciscans worldwide consider the book, now known as the St. Francis Missal, to be a relic of touch, and many make pilgrimages to Baltimore to see it.”

The exhibition, which also showcases related artifacts, comes following a two-year restoration of the St. Francis Missal. The book, particularly its fragile binding, had suffered from decades of use. The Missal has since been repaired and stabilized, and is being digitized for the Walters’ manuscript website Ex Libris.

“This exhibition is an opportunity for visitors to view one of the museum’s most famous works of art,” said Julia Marciari-Alexander, Andrea B. and John H. Laporte Director. “We are thrilled to once again showcase this key object in our permanent collection, and to share exciting new discoveries.”

The Walters Art Museum has 36,000 objects from around the world spanning more than seven millennia. The exhibit runs through the end of May. Admission is free.