Mary miraculously spoke through this image, which was rescued from a trash pile 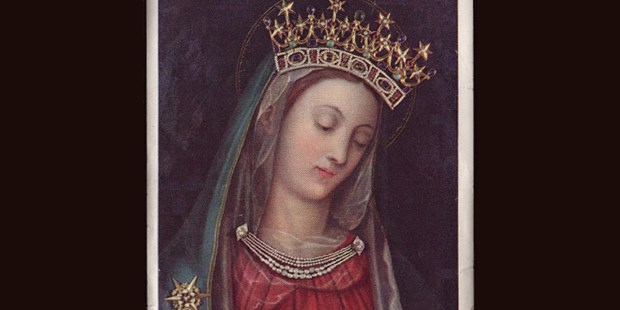 Our Lady of the Bowed Head is in Vienna.

“The beauty of the images moves me to contemplation, as a meadow delights the eyes and subtly infuses the soul with the glory of God.” St. John Damascene

The story of Our Lady of the Bowed Head begins in Sicily in 1610. A Carmelite monk, by the name of Dominic of Jesus and Mary, was charged with inspecting an old, broken down house to see if it might be suitable to convert into a monastery. As he walked around the grounds, he passed a pile of trash. Giving the debris a cursory look, Friar Dominic kept on walking. Suddenly he stopped. Something or someone was telling him to go back and look closer at the trash.

He heeded the prompt and returned to the garbage pile. He grabbed a broken stick and began separating the mounds of junk. When he saw the edge of a picture frame, he paused. He carefully pushed away the debris that surrounded what he now realized was a painting. Rescuing the artwork from its impending fate, he pulled it out and discovered it was an old oil painting of the Blessed Virgin Mary.

He could not believe someone had thrown such a beautiful picture of the Blessed Mother in the garbage. Friar Dominic wrote that the first thing he did was to apologize to Mary. He said, “I am sorry, dear Mother, that someone has treated thy image in such a terrible manner. I will take it back to the monastery with me and fix it up, and I will give thee the homage which thou so rightly deserve.”

Dominic did indeed, take it back to the monastery, and restore it as best he could. He hung the picture in his cell and every day gave Mary the attention, reverence, and devotion that was due her. He prayed to Our Lady with an increased exuberance asking her for the grace to please Jesus in all things.

One day when Dominic was cleaning his cell, the sunlight happened to land on the picture. Dominic thought there was dust on the painting and went over to clean it. The humble friar felt that he had been remiss in his duties and, raising his eyes to heaven,  apologized to Our Lady for having neglected her painting. He even apologized for using the old rag he had.

As he proceeded to dust the picture, Our Lady’s face began to move, and she smiled at the priest. Dominic was not sure what was happening and then Our Lady spoke to him, saying, “Fear not, my son, for your request is granted! Your prayer will be answered and will be part of the reward, which you will receive for the love that you have for my Son Jesus and myself.”

She proceeded to tell him that she would grant him any favor he wanted. He asked for Her to help his friend be released from Purgatory. She told him, “Dominic, my son, I will deliver this soul from Purgatory if you will make many sacrifices and will have many Masses offered for this soul.” Then the apparition of Mary faded away.

The apparition of Our Lady vanished and Friar Dominic knew he had to share the painting with everyone. It was placed in the Oratory of St. Charles located next to the Church of Santa Maria de la Scale.

Today it is in the monastery Church of Vienna Dobling. On September 27, 1931, it was solemnly crowned by Pope Pius XI – the 300th anniversary of its arrival in Vienna.

Fr. Dominic was declared Venerable by St. Pius X in 1907.