Similarities between Our Lady’s two apparitions on February 11 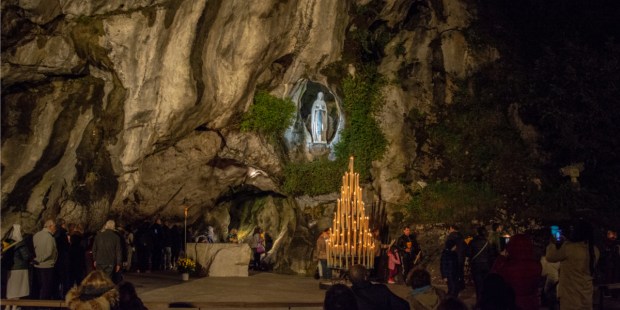 February 11, 1858, was a momentous day for a young French girl named Bernadette. It was on that day that she received a heavenly visitor in a small village tucked away in the Pyrenees Mountains. The lady from heaven would continue those visitations 18 more times, ending on July 16, 1858.

Mary didn’t appear only in Lourdes on February 11. In 1933 she began a series of apparitions in Banneux, Belgium, beginning on January 15 and ending on March 2. Spanning almost two months, Mary appeared eight times, and specifically chose to appear on February 11. I’m almost certain Heaven didn’t choose this day by chance, but instead, wanted to show the connection between Lourdes and Banneux. Similar appearance, story, and message.

Many are familiar with the image of Our Lady of Lourdes. The grotto of Massabielle (the cave, Mary, and Bernadette) is replicated at parishes, retreat centers, and shrines throughout the world. The Blessed Virgin appeared wearing a white dress with a blue sash.

The first time a person looks at a statue of the Virgin of the Poor, the name Our Lady revealed to the visionary Mariette Beco in Banneux, they might immediately think: “Isn’t this Our Lady of Lourdes?” Mariette described the woman as wearing a long white gown, a blue sash, with bare feet topped by a yellow rose.  In the Lourdes apparitions, Our Lady’s feet also were shown, and had two yellow roses on them. And both the Virgin of Lourdes and Banneux had a rosary at their waist Given the similarities of Mary’s dress, was Mary trying to replicate the Lourdes apparition in a Belgian town? Quite possibly.

Anyone who has watched the film The Song of Bernadette will remember the moment when St. Bernadette begins to dig in the ground for a spring of water. It was at Mary’s request that she did this. People thought Bernadette was deranged, but soon after she dug, a spring of water was discovered, and healings immediately began to occur. Today that same spring in Lourdes is accessible to pilgrims and many bathe in the waters, in response to Our Lady’s request of Bernadette to wash herself in the water.

The story of Banneux is a bit different. Our Lady led Mariette to a spring of water and declared, “Put your hands in the water! This fountain is reserved for Me.” Rather than a discovery of a spring unknown to people, Mary uses a spring for her purposes, namely to obtain the grace of healing. Just as Bernadette washed herself in the miraculous water, Mariette put her hands in the water and would bless herself. Just as in Lourdes, Our Lady in Banneux uses water for the purposes of healing and grace.

On February 11, when Our Lady spoke to Mariette, she said, “I come to alleviate sufferings.” With this statement she indicates the purpose of her apparition. The alleviation of sufferings occurs through miraculous healings — of which 50 have been authenticated — but also by the comfort of Mary’s presence and the peace people experience when they visit a site of Marian apparition.

Although Mary did not explicitly mention healing during her apparitions in Lourdes, beginning with February 11, the unspoken message of Lourdes is in fact healing. Seventy healings have been authenticated since the apparition, and many other healings have been claimed by pilgrims. The miraculous spring uncovered by St. Bernadette and the spring that Mary led Mariette to have become places for pain and suffering to be alleviated. Just as Mary appeared in similar dress, offering a similar story, so too is the message similar. In both villages, Mary wanted to relieve suffering.

While Lourdes remains one of the most popular Marian apparitions, those received by Mariette Beco are virtually unknown.  There have been many apparitions of Our Lady throughout the world. If you are hoping to know more about Mary’s messages and how to live them in your life, I invite you to join me on A Lenten Journey with Mother Mary.

Day by day, I will unpack a message of an approved apparition and offer tips how to live that message not only that day and the season of Lent, but for the rest of your life. Make your Lent a pilgrimage to the sites of Mary’s apparitions and come to know and live her messages. You can obtain your book from Sophia Institute Press or wherever Catholic books are sold!