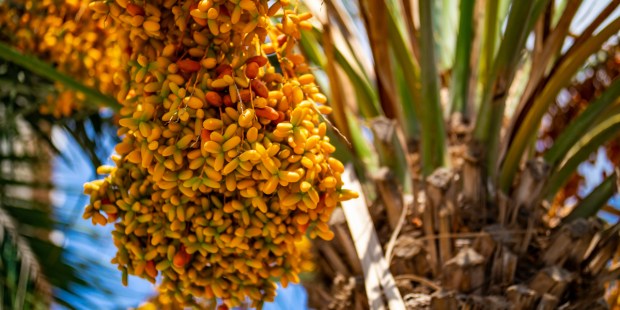 2,000-year-old seeds from Masada and Qumran beginning to produce fruit.

Archaeologists regularly uncover artifacts that tell us new things about how people lived thousands of years ago. Now, it’s possible that tiny artifacts from archaeological digs in the Holy Land might suggest something about food that people enjoyed in Jesus’ time.

Incredibly, 2,000-year-old date-palm seeds found at the site of Masada and elsewhere were discovered to be still viable, and date trees—a variety of which no longer existed—have been sprouted and grown. One of the trees is now beginning to produce fruit.

The discovery traces its roots to an Israeli doctor’s visit to India in 1986. It was on that trip that Dr. Sarah Sallon had become ill and found that nothing was helping her get over the sickness—except traditional herbal remedies. Back in Israel, she sought out medicinal plants, but she heard about ancient medicinal plants that had disappeared.

“They’re just historical ghosts,” she told National Public Radio. “Like the famous date plantations along the Dead Sea, 2,000 years ago—described by Pliny; described by Josephus, the first-century historian. They’re not there anymore. They just vanished.”

But she knew that seeds from such plants still existed. So why not try to grow them?

“They thought I was mad,” she said of the archaeologists she approached with the idea. “They didn’t think that this was even conceivable.”

Eventually, some archaeologists provided seeds, and Sallon and Elaine Solowey, a researcher at the Arava Institute of Environmental Studies, planted them them at a kibbutz in southern Israel. Lo and behold, they sprouted.

How that’s even possible has to do, at least in part, with the lay of the land. Seeds found at Masada, the site of a famous Roman siege against Jewish rebels in the First Century, benefited from being near the lowest point on Earth—the Dead Sea—and therefore had “an especially thick layer of atmosphere to protect from cosmic radiation that could damage the seeds,” the Atlantic pointed out. In addition, the seeds are “physically tough and, because they are adapted to the desert, especially tolerant of drying out.”

The first tree that grew from that “sowing” is now about 12 years old. But because it grew from these ancient seeds, Sallon and Solowey dubbed it Methuselah, after the Old Testament patriarch who lived to the ripe old age of 969. Because date palms are either male or female, and each tree makes either pollen or fertile flowers, it takes both to produce fruit. So Methuselah, a male tree, needed a mate. Sallon found another archaeologist who had recovered date seeds from Qumran, where the ancient texts known as the Dead Sea scrolls had been discovered. She and her colleagues grew another six trees from some of these ancient seeds, and two are female.

According to a paper published this month in the journal Science Advances, Sallon and her colleagues note that dates in the Kingdom of Judah were particularly renowned for their quality and quantity. “These so-called ‘Judean dates’ grown in plantations around Jericho and the Dead Sea were recognized by classical writers for their large size, sweet taste, extended storage, and medicinal properties,” the researchers say. “While evidence suggests that Judean date culture continued during the Byzantine and Arab periods (4th to 11th century CE), further waves of conquest proved so destructive that by the 19th century, no traces of these historic plantations remained.”

The research also suggests that date growers employed techniques such as cloning varieties that they found more palatable and cross-breeding with pollen from male trees in other countries.

“These findings suggest that Judean date culture was influenced by a variety of migratory, economic, and cultural exchanges that took place in this area over several millennia,” the paper states.

There’s hope for good fruit from the current research, and in fact, Methuselah, now mature enough, pollinated a modern female, and they produced dates.

In any case, the whole thing has provided food for thought. As Sarah Zhang writes in The Atlantic, “Around the time Romans were laying siege to Masada and the Dead Sea Scrolls were being written, these seeds were being formed.”