12 Marian images crowned by the pope

These images of the Virgin Mary were officially crowned by the pope as a special way to honor the devotion of the people.

On certain occasions a pope will choose to officially “crown” an image of Our Lady. This typically involves the blessing of an ornamental crown that is fixed atop a painting or statue.

According to the Catholic News Agency, “A canonical coronation is a pious institutional act, wherein the pope, through a bull [an official papal document], designates a crown or stellar halo to be added to a Marian image under a specific devotional title in a particular area or diocese.”

There exist dozens of images in many countries around the world that have received pontifical coronation. 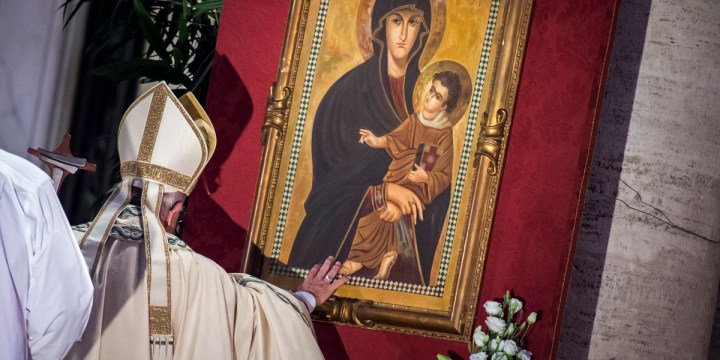 The Catholic Encyclopediagives a little history behind this custom, which has roots in both Eastern and Western Christianity.

The offering of crowns to adorn images became a common practice in the Eastern Churches. In itself it would mean no more than adding such additional splendor to the icon as might also be given by a handsome gold frame. Then the affixing of the crown naturally attracted to itself a certain amount of ritual, and the crown itself, like all things dedicated to the use of the Church, was blessed before it was affixed.At Rome, too, a ceremony evolved out of this pious practice. A famous case is the coronation of the picture of our Lady in St. Mary Major. Clement VIII (1592-1605) presented crowns (one for our Lord and one for His Mother, both of whom are represented in the picture) to adorn it; so also did succeeding popes. These crowns were lost and Gregory XVI (1831-46) determined to replace them. On 15 August, 1837 surrounded by cardinals and prelates, he brought crowns, blessed them with a prayer composed for the occasion, sprinkled them with holy water, and incensed them.

The crowning of an image is a way for the pope to affirm the devotion of the local people, who have proven over time to be devoted to God, through the intercession of Mary under a particular title.

It also recognizes the reality that Mary is our spiritual Queen, currently reigning in Heaven. Pope Pius XII dedicated an entire encyclical (Ad caeli reginam) to this topic, urging us all to invoke Mary as our Queen and Mother. Let us heed his words and imitate our Queen as much as we can.

All, according to their state, should strive to bring alive the wondrous virtues of our heavenly Queen and most loving Mother through constant effort of mind and manner. Thus will it come about that all Christians, in honoring and imitating their sublime Queen and Mother, will realize they are truly brothers, and with all envy and avarice thrust aside, will promote love among classes, respect the rights of the weak, cherish peace.

Read more:
Why queens wear a crown, and why Mary does