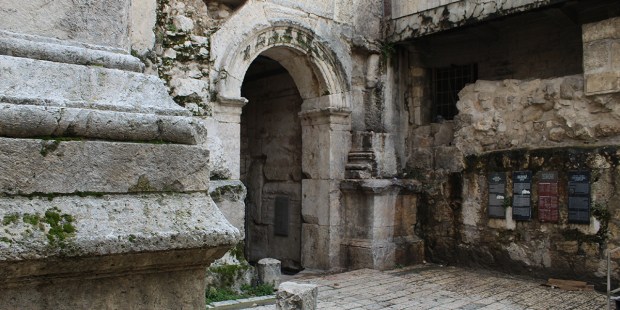 The site explores the extensive evidence left behind by the kingdoms of the past.

On the north side of the Old City of Jerusalem, where today stands the storied Damascus Gate, there lies an ancient Roman square that once teemed with the city’s commerce and transportation. The site, now fully excavated, has yielded an archaeological treasure trove of historical information that has just been released to the public.

The Jerusalem Post reports that the historic site — estimated to date back to 135 AD — took nearly 90 years to excavate, with work beginning in the 1930s. The majority of the unearthing work was done by the 1980s, but the next four decades were committed to preservation work. On February 9, 2020, the site was opened up to journalists, who became some of the first to tread the storied steps in two millennia.

Gura Berger, spokeswoman for the East Jerusalem Development Company (PAMI), described the architecture of the site, which contains contributions from the Ancient Romans, the Ottomans, the Byzantines, and the Crusaders, as similar to a “layer cake.”

The tour begins at the historic Damascus Gate, built by the Ottomans in the 16th century, but it then travels deeper, where guests are treated to a rare glimpse of the many iterations of the gate, which are notable from the various materials used by the many different kingdoms that occupied the area at one time or another. Remaining from the Crusader age, for example, was also a small chapel and a well, which was also thought to have been used by the Byzantines.

Dr. Shlomit Weksler-Bdolah of Israel Antiquities spoke to The Jerusalem Post’s Ilanit Chernick about the many layers of history surrounding the site. She said:

“Each layer marks when an empire was defeated and when a new empire rose because they built on top of it, and in some cases used the infrastructure left behind. The Ottoman wall, which used a different, smaller kind of stone, was built on top of these ancient foundations.”

The ancient gate still retains its arches, which stretch to an impressive 40 meters wide and 20 meters high. An inscription on the top claims the city to be named “Aelia Capitolina,” which was briefly the name of Jerusalem after the failure of the Bar Kochba Revolt, around 132-136 AD.

Visitors to the site will be afforded an opportunity to walk the ancient Roman streets, the stones of which still bear the telltale indentations of wagon wheels. The educational journey will examine the architectural contributions from the many cultures which have occupied the territory over the last 2,000 years, culminating in a centerpiece statue of Emperor Hadrian.

When examining an old game board, carved into the floor of a soldiers’ barracks, Berger noted that archaeological discoveries that may seem simple, often have the greatest potential to teach us about the people of the ancient world. She said:

“We can connect with those who were once here… whatever it is, it’s the personal touch, someone like you or me was here 2,000 years ago. We can touch them through this.”