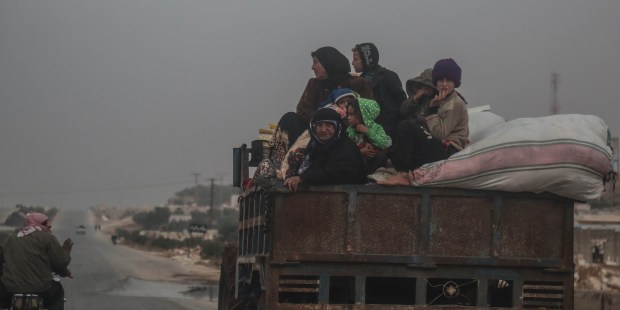 For the second time this week, Pope Francis made a plea for prayers for Syria, leading pilgrims at the general audience in a moment of silence.

At the end of the general audience, the Holy Father said:

I would like us all to pray for beloved and tormented Syria at this moment. So many families, so many old people, children, are compelled to flee from war. Syria has been bleeding for years. Let us pray for Syria.

In the last few weeks, hundreds of thousands of civilians, mostly women and children, have been displaced as government forces try to take over Idlib province.

According to Al Jazeera in a photo essay,

More people have fled fighting in Syria over the past 10 weeks than at any other time in the nearly nine-year-old conflict and the city of Idlib, where many are sheltering, could become a graveyard if hostilities continue, two United Nations agencies said on Tuesday.

Assad’s forces are fighting northward, with support from Russia and Iran. Turkey, to the north, and already dealing with refugees, is responding with the promise that it will hit Syrian forces wherever necessary. Meanwhile rebel forces were able to shoot down a government helicopter on Tuesday.