Memento mori in art: Skulls, skeletons, and rotting fruit to remind us of the vanity of life

Mortality was on everyone’s mind in bygone centuries, but these useful reminders of the inevitability of death remain a popular artistic theme today.

As Lent draws closer, Catholic thoughts will be turning to the prospect of death – and resurrection. In the past, there were constant reminders. The most common expression of this was the memento mori. As the Latin so precisely puts it: “remember that you will die.” Mortality was on everyone’s mind in bygone centuries. Although medieval life was shorter and filled with more unexpected endings, memento mori really took off during the Renaissance. This was when ideas of personal salvation became more prominent. Before then, there was a more collective approach, with lots of Day of Judgment imagery. 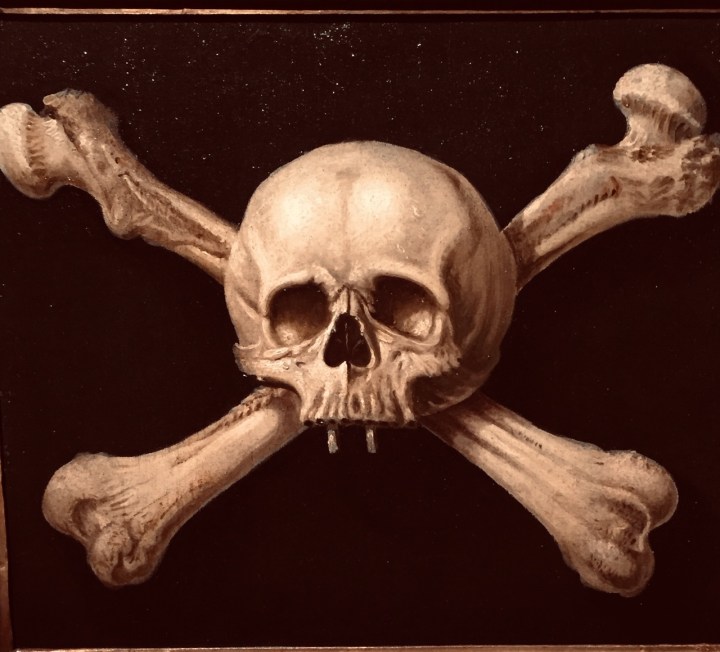 The range of memento mori is astonishing. The most popular inspiration is a skull or a complete skeleton. They take the form of paintings, sculptures, larger-than-lifesize replicas, or real human remains put on display.

Part of the power of relics is that they are more than a reminder of a holy person’s life, they are also the physical essence. Most of the faithful have over the centuries settled for more convenient memento mori. It was better to have objects that could be carried around without the covetability of saintly relics.

Christianity is not the only faith to embrace memento mori

Memento mori became very much a Christian device, although other faiths have shared the concept. Some forms of Buddhism embrace the subject matter, especially in Tibet. It also became popular in Japan, where the most darkly humorous images emerged. The fun that carvers could have representing skulls, in particular, suggests a lighthearted approach to death that was less common in Christendom.

Perhaps the jolliest and now the most commercialized Christian memento mori are products of the Mexican Day of the Dead. Masked people and colorful skeletons have spread around the world. They can now be found in outlets such as British Museum gift shops, where I last saw them being marketed as Christmas decorations.

The ghastliest memento mori were found during the Renaissance

Memento mori were a more serious business during their Renaissance heyday. Painters included them in “Vanitas” paintings. They were to show the vanity of human lives and were not for fun. These were solemn reminders. Many a meal would have had a less digestible dimension. The wall of affluent dining rooms would be adorned with images of rotten fruit and insects, or artfully placed skulls next to flowers in full bloom. For those who chose not to see the more subtle message, there was everything from full-size sculptures of decomposing people to rosary beads with a happy human face on one side and a skull on the other.

The skull was always the key motif. As well as being a reminder in itself, there was always the link between it and the crucifixion of Christ. Calvary, being the “Place of the Skull,” was filled with human detritus. The skull of Adam was the most frequently depicted.

Even those Christian memento mori that might seem a bit frivolous, such as Mary Queen of Scots’ supposed watch concealed within a silver skull, were all about the passing of time and our ultimate demise. Hers came earlier than expected, with a botched beheading. Most of Mary’s court were Protestants, and memento mori were one of the few meeting points for Christians of differing views. Even the Puritans who sailed to America were not averse to depicting the inevitability of death, despite their disapproval of imagery in general.

Admiration for memento mori has continued right up to the modern era. The skull remains a favorite motif. The devout closet Catholic Andy Warhol treasured an antique skull after a near-death experience. He used it as a model for numerous prints and paintings, along with exhortations such as “Heaven and hell are only a breath away.” In more recent times, his heir Damien Hirst created a diamond-encrusted skull that was for a while the world’s most expensive work of art. Hirst has a home in Mexico, which is unusual for a British artist, and was raised a Catholic. He acknowledges the visual influences of his upbringing but that is as far as his faith goes these days.

Now that Korean cinema is all the rage at the Oscars, it might be worth pointing out that there is a 20-year-old movie from Korea titled Memento Mori. It wasn’t as successful as Parasite, and it’s not actually about memento mori, but at least the expression lives on.