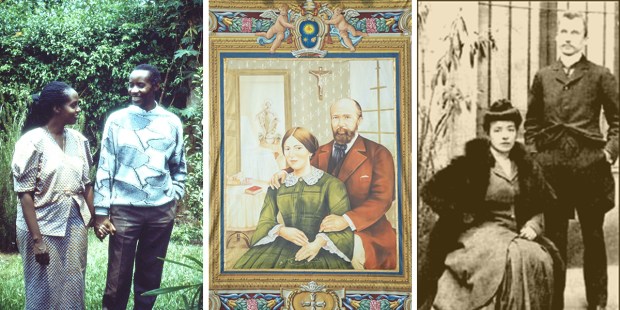 Marriage is a vocation to sanctity, and leads couples along roads as unique as they are.

When Sts. Louis and Zelie Martin were canonized together in 2015, the Catholic world rejoiced at this couple who had found holiness through their marriage. But while the Martins were the first married couple officially canonized together (without other companions), there are any number of other married couples in which both partners are saints, and even more in which the spouses’ causes for canonization are open.

Sts. Timothy and Maura (d. 286) were a young Egyptian couple martyred during the reign of Diocletian. Timothy was a lector and thus well-known to the officials who were persecuting Christians. When he and Maura had been married only 20 days, he was arrested and Maura was told to beg him to apostatize. Instead, Maura encouraged him to remain strong and the two were crucified facing one another, spending one third of their marriage dying together.

Sts. Gregory and Nonna of Nazianzus (276-374, 305-374) were the parents of Church Father St. Gregory Nazianzen and his siblings, Sts. Caesarius and Gorgonia. Though Nonna was raised Christian, her husband was a pagan. Nonna prayed for years and finally Gregory the Elder was given a vision that led to his conversion and his veneration as a saint along with his entire family.

Sts. Basil and Emilia (4th century), likewise, were the parents of children whose fame overshadowed theirs: Sts. Basil the Great, Gregory of Nyssa, Macrina the Elder, Peter of Sebaste, Theosebia, and Naucratius. These holy men and women (three of whom were bishops) owed their faith to the formation they received from their saintly parents.

Sts. Henry and Cunegunda (973-1074, 975-1040) were Holy Roman Emperor and Empress, reputed to have had a Josephite marriage. They were diligent and successful rulers and were married for 25 years before Henry’s death, at which point Cunegunda became a Benedictine nun.

St. Francis Choe Kyong-Hwan (1805-1839) and Bl. Maria Yi Seong-Rye (1801-1839) were a Korean couple during a time of intense persecution. Francis led the family out of the city to establish a Christian community in the wilderness. When they were eventually arrested, Maria was terrified for the health of her baby and apostatized to save the baby’s life. After the two were released, Maria lamented her choice; she gave the baby to family members to raise, kissed all her children goodbye, and presented herself to the authorities to be martyred as her husband had been. Their son, Venerable Thomas Choe Yang-eop, was the second Korean to be ordained a priest.

Sts. Peter Choe Chang-hub and Magdalena Son So-Byok (1786-1840, 1801-1840) were the parents of a young daughter when they lost their second child as an infant. And their third. And their fourth. Nine children in a row. All died as infants. Finally, another little girl who survived, a balm for the grieving parents’ souls, though they must surely have ached for the little ones they had buried. In 1839, when their oldest daughter (St. Barbara Choe Yong-i) was a young mother and their youngest daughter was only 2, the family was arrested. The three adults were tortured and martyred.

Blessed Victoire Rasoamanarivo (1848-1894) was a Malagasy noblewoman, a convert to Catholicism, and the heart of the Catholic Church in Madagascar during the years when foreign missionaries were expelled from the country. She was married to a womanizing drunk named Ratsimatahodriaka. Though her friends and family urged her to leave him, Victoire refused. She felt called to stay and love her husband in spite of his many flaws. In the end, Ratsimatahodriaka had an accident and, realizing that he was close to death, asked for baptism. Victoire baptized him on his deathbed. Though Ratsimatahodriaka will certainly not be canonized, he is in heaven because of the grace of his marriage (and love of his wife) that won him a heart open to baptism.

Blessed Luigi and Maria Quattrocchi (1880-1951, 1884-1965) were an ordinary Italian couple with four children. Luigi was a non-practicing Catholic before he married Maria, but over the years their marriage made him a saint. Maria was a holy woman who got so sick when she was pregnant that she nearly despaired at each positive pregnancy test. The two did nothing particularly remarkable, but their ordinary marriage transformed them into extraordinary Christians, as all marriages should.

Servants of God Cyprien and Daphrose Rugamba (1935-1994, 1944-1994) were married after Cyprien, a former seminarian, had lost his faith completely. Though Daphrose was a faithful Catholic, Cyprien was a philanderer who had multiple affairs and one illegitimate child during their marriage. For nearly 20 years, Daphrose prayed for her husband’s conversion. Finally, as he lay dying, Cyprien had a sudden conversion and looked up to see his wife beside him. Cyprien was healed and begged Daphrose’s forgiveness, which she gladly gave. The next 12 years of their marriage were beautiful and joyful, until the couple was killed (with six of their children) in the opening days of the Rwandan genocide.