Carmelite friars in Venice have created a garden that displays the journey of Catholic souls described by Spanish mystic St. Teresa of Avila in 1588.

St. Teresa of Avila is one of the most important female saints of Catholicism. Born a Spanish noblewoman, the Carmelite sister founded the monastery of St. Joseph in Avila, Spain, and compiled a series of texts that have become a staple of Catholic literature. Her seminal work, completed in 1588, is titled The Interior Castle and provides imaginative insights on how to lead a fulfilling life in communion with God. St. Teresa of Jesus, as she is often referred to, imagined our soul as a castle-shaped diamond containing seven houses or mansions, each representing a step in the journey that leads to total union with God.

A monastery garden based on a saint’s vision

Today, you can visit a place that has actually turned her literary allegory into reality. The Order of Carmelite Friars in Venice, Italy, has created a “Mystical Garden” with seven flower beds, each representing one of the mansions of St. Teresa’s Interior Castle.

The Carmelite Order was founded in 1200 near Mt. Carmel in Palestine. The first Carmelite friars escaped the Holy Land after a Saracen invasion in the 13th century and established themselves in mainland Europe. Since their arrival in Venice in the 17th century, they have maintained a vegetable garden near the Church of St. Mary of Nazareth. There they grew vegetables as well as medicinal herbs used to make their renowned herbal remedy called “Melissa.” In 2014, that centuries-old garden was restructured to replicate the seven “houses” that St. Teresa used to allude to the seven stages that need to be integrated on a soul’s journey to total communion with God.

The first “mansion” in St.Teresa’s book is dedicated to “self-knowledge” and humility, which can be achieved through prayer and meditation. Carmelite friars in Venice represented this “mansion” with a humble and simple grassy lawn.

The second “house” of the soul is dedicated to purification that can be achieved by prayer, conversations with good people, sermons and good books. In Venice’s Mystical Garden this is represented by medicinal herbs, which stand for the purification of the body in order to reach communion with God.

The third flower bed in the gardens hosts vegetables, and stands as a symbol for the developed ability to practice charity, avoid sins and be careful in one’s speech granted to those who move into the third house of the Interior Castle.

The fourth mansion signals a shift from active stages of prayer, pursued in the first three mansions, to mystical stages of prayer where believers can experience God’s supernatural presence. This shift is symbolized by a vineyard with 17 rows of vines. The way vines can be transformed into wine is in fact reminiscent of the supernatural power of the fourth house.

The fifth flower bed is dedicated to “ancient” and “foregone flowers,” a reference to the “hidden treasures” that St. Teresa described in the fifth mansion of the Interior Castle, treasures that can be achieved by passive contemplation. The Spanish mystic specified that most of her fellow Carmelite sisters could achieve this fifth stage.

The sixth mansion is, according to St. Teresa, the stage where believers transition from illuminative stages to unitive stages, those of communion with God. Here, believers can experience those mystical episodes such as visions and voices typical of great mystics such as Padre Pio and St. Thomas Aquinas. In the Mystical Garden, this stage is represented by olive trees that can live in very harsh conditions for centuries in communion with their wider environment.

The seventh and final mansion is where the soul finally enters a marriage with God. All three Holy Divine Persons of the Trinity appear and speak to the soul. St. Teresa achieved this state in her lifetime and recounts a detailed appearance of Jesus appearing in front of her. This stage is symbolized by a forest, where large trees symbolize the essence of God.

The Mystical Garden of the Carmelites in Venice is right behind the main train station, at Cannaregio, 54/A. They are open every day from 9:00 a.m. to 5:00 p.m. 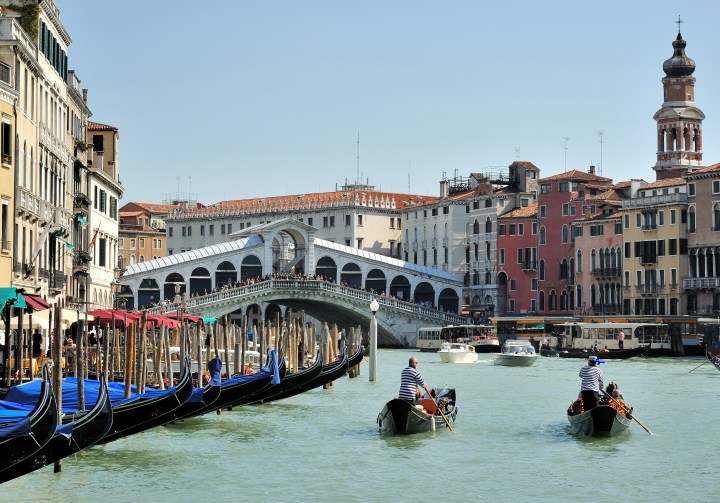 Prayer for this evening
Top 10
1
Bret Thoman, OFS
What Padre Pio saw in the Spanish Flu of 1918
2
Annalisa Teggi
Amputee from the waist down is thankful every day to be alive
3
Zelda Caldwell
Mystery of crosses on walls of Church of the Holy Sepulchre may h...
4
Philip Kosloski
Padre Pio’s favorite prayer of petition
5
Philip Kosloski
St. Padre Pio: His life, his miracles and his legacy
6
Philip Kosloski
Catholic prayers for strength
7
Cerith Gardiner
7 Joys to be had from a lengthy marriage
See More
Newsletter
Get Aleteia delivered to your inbox. Subscribe here.