Holy water bottle from the Titanic held a goodbye note 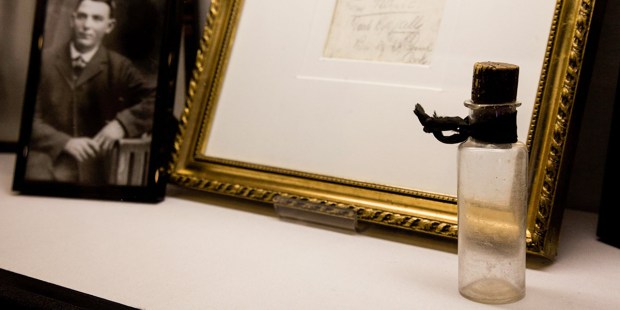 A year after the ship sank, the bottle was found, just a few kilometers from the sender’s hometown in Ireland.

Jeremiah Burke, a 19-year-old Irishman, was on board the Titanic, on his way to meet up with two sisters who had already emigrated to the U.S. His cousin Nora Hegarty was with him.

He was the youngest of seven children and had worked on the family farm before setting out on his journey. His sisters had settled in Charlestown, Massachusetts, and had sent money home for Jeremiah to join them.

Before he left, his mother Kate gave him a small bottle of holy water for the trip.  His father William brought the cousins to Queenstown to see them off.

When the ship hit an iceberg and began to sink, Jeremiah wrote a note and placed it in the holy water bottle his mother had given him, tied it up with his own shoelaces, and threw it overboard.

The note simply read: “From Titanic, goodbye all, Burke of Glanmire, Cork.”  He couldn’t have known that his would be the last words from the Titanic.

Kate immediately recognized her son’s handwriting, and identified the holy water bottle she had given him just before he set off on his trip.

An article in The Cork Examiner on April 27, 1912, said the “sympathy of the people of Cork will go out in full measure to the parents of Miss Nora Hegarty of Killavallig, Whitechurch, and Mr. Jeremiah Burke, of Upper Glanmire, both of whom were only 19 years of age and who lost their lives in the Titanic disaster.”

“They left Queenstown full of hope for a bright and happy career in the United States,” the article said. “Their parents and relatives will have the sympathy of all in the great sorrow into which they have been plunged.”