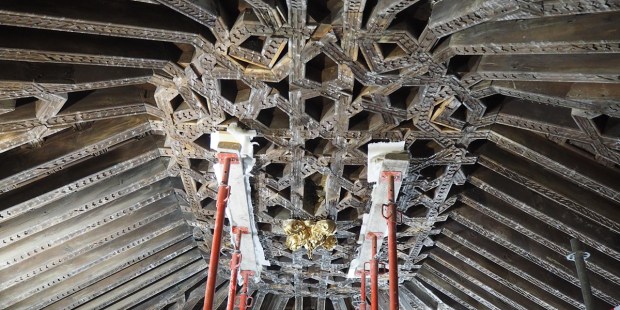 The gorgeous wooden ceiling was once enjoyed by St. Teresa of Ávila.

The Catholic church of Santa Maria la Blanca, in Madrid, has concluded a six-month restoration effort that has revealed a beautiful, rare example of a 16th-century lattice wood ceiling. The impeccably crafted rafters were previously covered by plaster for hundreds of years, but now they are exposed for all to enjoy once more.

Sam Jones of The Guardian explains that the hidden ceiling was discovered more than 20 years ago, but the effort to remove the plaster covering it only began in 2019. Ignacio de la Vega, lead architect on the restoration, suggested the effort to hide the ceiling could have been for protection. He said:

“It would have been covered up during one of the European pandemics. A lot of sick people were brought into churches and people thought that the disease wouldn’t spread if you covered everything and whitewashed everything. That happened in a lot of churches and what was underneath was forgotten for centuries.”

The architect went on to describe the woodwork as a “jewel,” noting that it is the only example of a completely intact lattice wooden ceiling in Madrid.

Also uncovered in the restoration was a window that had long been obscured by the plaster, as well as a layer of decorative art carved into the wood above the nave. Restorers also stumbled upon another carved wooden ceiling; however this was not as ornate as the lattice woodwork and it was left covered due to budgetary restraints.

The community at Santa Maria la Blanca hopes that the newly revealed piece of historic art will draw more worshipers to their pews. Over the course of its history, the church had been used as a rest stop on the journey from the city of Alcalá de Henares to Madrid. One such traveler who frequently visited Santa Maria is reputedly St. Teresa of Ávila.

According to Father José Crespo, the current parish priest, the faithful have already begun to return, with visitors coming from Spain, across Europe, and even overseas to stand under the centuries old ceiling and pray where St. Teresa once prayed. Fr. Crespo told the Guardian:

“St Teresa was here,” said the priest. “What really moves me is that she was here and she would have seen this same ceiling we’re seeing today.”