Why does St. Peter always hold keys in art? 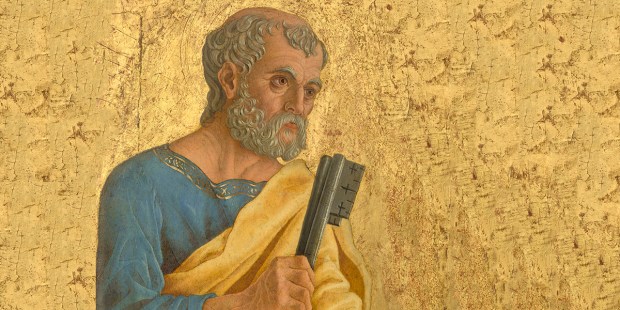 The origin of this artistic symbol is found both in the Old and New Testament.

One of the easiest identifiers of St. Peter in Christian art has become a large set of keys. This applies both to paintings of the first pope and to statues.

Jesus speaks these words to St. Peter, granting him a special authority to lead the Church after he ascends into Heaven.

The symbolic language of Jesus is not the first time keys are mentioned in the Bible, as it first shows up in the book of Isaiah.

I will place the key of the House of David on his shoulder;
what he opens, no one will shut,
what he shuts, no one will open. (Isaiah 22:22)

Thomas Smith explains in a reflection for Ascension Press that, “In Isaiah 22, we discover one of the tasks of the prime minister of the Davidic Kingdom (called the al bayit in Hebrew) is to “carry the keys,” symbols of authority over the house of David. This sacred stewardship allowed the vicar of Judah’s king to open what others had shut and to close what had been opened.”

Jesus uses this imagery in a deliberate manner, bestowing upon St. Peter a particular authority over his Church.

The Catholic Encyclopedia summarizes all that “the power of the keys” entails.

Artists also had their own intentions with the portrayal of the keys, visualizing their own interpretation of Jesus’ promise to St. Peter, as described by Elizabeth Goldsmith in her book, Sacred Symbols in Art.

It is not until about the eighth century that the keys become his peculiar symbol. Sometimes he has one great key, but usually he carries two keys, one of gold and one of silver—to absolve and to bind—or according to another interpretation one is of gold for the gates of heaven, the other of iron for the gates of hell. The legend that makes St. Peter the keeper of the gate of Paradise, having power to grant or refuse admission, found its origin in the delivery of the keys to St. Peter.

Keys remain a very important symbol, not only for St. Peter, but also his successor the pope as well as for the Vatican, where the pope resides.

Read more:
How St. Peter first became a bishop in Antioch, not Rome