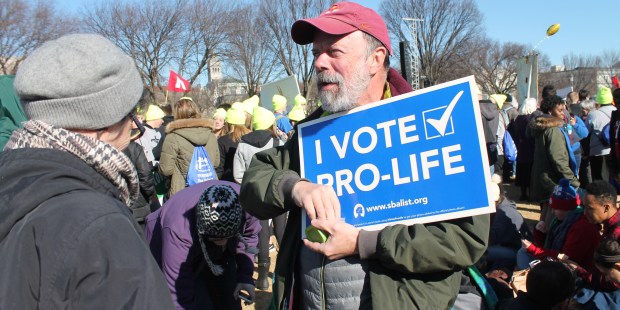 Only 11% believe it should always be illegal.

A majority of Catholic voters in the United States think that abortion should be legal.

A Real Clear Opinion poll conducted for the Catholic television and radio network EWTN found that American Catholics are not much different from the rest of the American electorate in their opinions about abortion’s legality. According to 2019 Gallup polling, 25% of Americans in general think abortion should be “legal under any circumstances. In the EWTN poll, which surveyed some 1,500 Catholic voters, 20% said the practice should always be legal.

In addition to that 20%, 31% of Catholic voters said abortion should be legal except in the case of late-term abortion, also sometimes referred to as partial-birth abortion, and 33% said it should be illegal except in cases of rape, incest or the when the mother’s life is in danger.

That means that 84% of those polled believe abortion should be legal at least in some cases, if not always.

The polling, conducted between January 28 and February 4, found that only 11% of Catholic voters said that abortion should always be illegal. Five percent said they did not know.

Forty-five percent of respondents were Democrats, 34% Republican, 20% were Independent or unaffiliated, and 1% answered “don’t know.” Thirty-six percent considered themselves liberal on most political issues, 23% moderate and 40% conservative. 83% said they would be definitely voting in the 2020 presidential election.

Forty-seven percent felt that things are “on the wrong track” in the nation, while 41% felt they are generally headed in the right direction.

Among those who said they would probably vote in a Democratic presidential primary or caucus, most supported former Vice President Joe Biden, with 29%. Vermont Sen. Bernie Sanders came in second with 24%, and former New York mayor Michael Bloomberg third, at 17%.

In a series of hypothetical scenarios, where various Democratic hopefuls were pitted against Trump, Biden received the highest vote among Catholics, with 51% saying they would vote for him if the election were held today and he was Trump’s opponent. Others matched against Trump were Sanders (50% of Catholics would vote for him); Bloomberg (48%); Massachusetts Sen. Elizabeth Warren (48%), and former South Bend, Indiana, mayor Pete Buttigieg (44%).

Fifty percent are open to voting for a third-party candidate, with 50% not open to that.

But 58% of respondents felt that Trump is committed to pro-life policies, with 22% disagreeing with that characterization.

Fifty-six percent agreed with the statement “the Democratic Party represents my values,” while 47% said that of the Republican Party.

Asked which party best protects religious liberty in America, the Democrats had a slight lead over the Republicans, with 33% to 32%.

Other results from the survey found: