In the shadow of the Basilica of the National Shrine of the Immaculate Conception, just a few miles due north of the nation’s capitol, sits what can be only called one of America’s national treasures. The Saint John Paul II National Shrine is an initiative of the Knights of Columbus, in which they assumed ownership of the ailing Pope John Paul II Cultural Center and re-imagined and renovated the site to become the massive 130,000 square foot shrine that it is today. 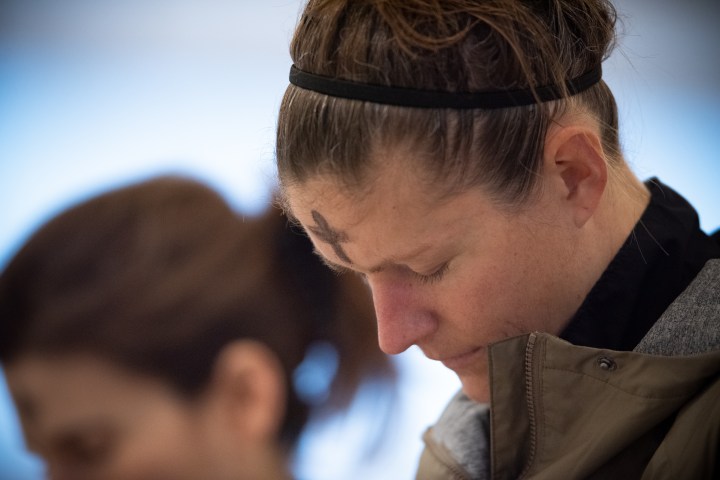 Centered around the Redemptor Hominis Church, which is at the heart of the shrine, are many incredible offerings. There’s the ‘A Gift of Love: The Life of Saint John Paul II’ permanent exhibit, which presents an in-depth look at the life’s journey of Karol Wojtyla from his youth through his papacy, using videos, artifacts and a variety of interactive displays. The church has a first class relic of the blood of St. John Paul II, in addition to over a dozen relics from others such as St. Elizabeth Ann Seton, St. Maximillian Kolbe and St. Faustina to name just a few. There’s also a diverse liturgical and event schedule that brings the Sacraments and spiritual guidance to life for those who visit.

With the beginning of Lent, visitors to the shrine celebrated Ash Wednesday along with the universal Church, receiving ashes and recalling the ancient Jewish tradition of penance and fasting.

In his March 2000 homily for Ash Wednesday Pope St. John Paul II prayed with the Psalmist, “Create in me a clean heart, O God, … take not your holy Spirit from me.”

We hear this plea echoing in our hearts, while in a few moments we will approach the Lord’s altar to receive ashes on our forehead in accordance with a very ancient tradition. This act is filled with spiritual allusions and is an important sign of conversion and inner renewal. Considered in itself, it is a simple liturgical rite, but very profound because of its penitential meaning: with it the Church reminds man, believer and sinner, of his weakness in the face of evil and especially of his total dependence on God’s infinite majesty.The liturgy calls for the celebrant to say these words as he places ashes on the foreheads of the faithful:  “Remember, man, you are dust and to dust you will return”; or, “Turn away from sin and be faithful to the Gospel.”

As Fr. José Maria Cortes, FSCB, the chaplain of the shrine, uttered the words “Repent and believe in the Gospel,” tracing ashy crosses on the forehead of each person, the call to repentance carried on as it has for two millennia.

And today in this very special place, built to honor the life and legacy of St. John Paul II and create an environment of deep spiritual encounter, one can hear the distant echoes of the great saint calling to us once again, “Repent and believe in the Gospel.”

For more information about the Shrine or to plan a pilgrimage, please visit : Saint John Paul II National Shrine

Read more:
16 Quotes from St. John Paul II about the essentials in life