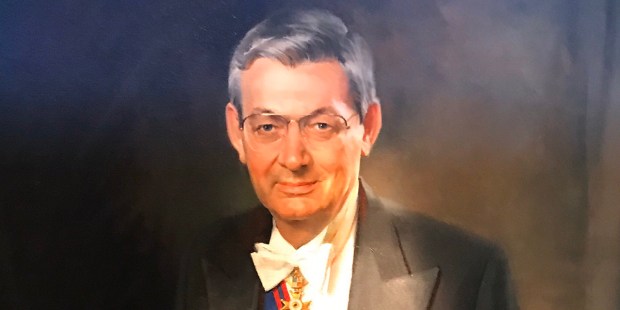 The long-serving Supreme Knight, who died at the age of 89, was among those who best exemplified Catholic faith in action.

Obituaries of Virgil C. Dechant, former Supreme Knight of the Knights of Columbus who died peacefully February 16 at his home in Leawood, Kansas, were factually correct but superficial. Dechant was a much larger man, with far more influence on the Church, than merely listing dates, offices held, and honors bestowed can suggest.

Joining creativity to love of tradition and business acumen, he shaped a profoundly Catholic organization suited to changing times. The question for the K of C now is whether it can rise to the contemporary challenge of relevance put to it by a secular culture radically opposed to what it stands for.

In a way, of course, the Knights have been here before.

At the urging of a young parish priest, Father Michael McGivney, whose cause for beatification and canonization is currently under consideration in Rome, a small group of Irish-American men met in February, 1882 in the basement of a New Haven church. Three years earlier a newspaper had headlined a story about the same church: “How an Aristocratic Avenue Was Blemished by a Roman Catholic Edifice.” The men had come together to launch a new organization as a bulwark against anti-Irish, anti-Catholic bigotry like that.

The name chosen for the new group was Knights of Columbus. Selecting Columbus as patron sent a message: “We [Catholics] got here [America] before you [Protestants] did.”

Many fraternal organizations of those times have withered and died, but the Knights survived and flourished. Combining religion and patriotism was a brilliant move that made the group, in the words of a historian, “a classic instance of a minority’s drive to assimilate.”

Years later, out in Kansas, a young man named Virgil Dechant joined the group. Laid up after an accident, he noticed that, family aside, most of those who dropped by to cheer him up were his brother Knights. Motivated now, he began his rise through the organization’s ranks, eventually becoming top Knight in Kansas. In 1967, by now a successful businessman and wheat farmer, he went to New Haven as Supreme Secretary. Ten years later the directors elected him Supreme Knight, the position he held until retiring in 2000.

Membership and insurance soared in those years, while business and investment

Success made the Knights an important source of financial support for popes, bishops, and innumerable Catholic groups. Locally, many pastors became increasingly aware of the K of C as a can-do group whose members were always ready to lend a hand to parish projects.

Even more important, the Knights imparted much needed stability to the Church during the troubled years after Vatican Council II. While others fretted about what it meant to be Catholic, these men knew the answer and, at their best, sought to exemplify it.

At the same time, the group showed it could move with the times. Hence its strong commitment to the pro-life movement and the defense of family life. That openness to adjustments has continued under Dechant’s successor, Carl Anderson, as illustrated by recent changes in K of C ceremonial garb and ritual, for many years considered virtually untouchable.

Today challenges to things dear to the Knights of Columbus are on the rise again. Fidelity to Catholic values, the glue holding the group together from the start, has situated this historically assimilationist and Americanist group in opposition to powerful secular forces on the life issues, marriage, and religious liberty. Columbus sometimes sailed on rough seas. As the secular environment becomes increasingly hostile, the Knights may be doing the same.