10 Saints who were leading scientists 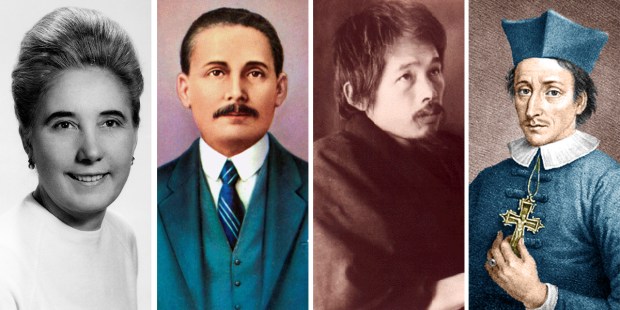 There are plenty of Catholics who have contributed greatly to science; some of them are canonized or on their way.

There is, in the modern world, a tendency to view science and faith as being opposed, as though a person taking college physics must necessarily experience a revelation that the universe created itself. Fortunately for scientifically minded Catholics, this narrative has no basis in reality. In fact, the annals of sainthood are filled with brilliant scientific minds, many of whom were pioneers in scientific fields.

Blessed Hermann of Reichenau (1013-1054) was born with severe disabilities (cleft palate, cerebral palsy, and spina bifida or possible spinal muscular atrophy) and raised in a monastery. He wrote on geometry, arithmetic, history, astronomy, theology, and music theory, and composed liturgical music. His most important scientific contributions were in the area of astronomy.

St. Hildegard of Bingen (1098-1179) was a writer so brilliant that she was eventually was made a Doctor of the Church, but she was brilliant in just about every other way, as well. In addition to being a mystic, a visionary, and an abbess, Hildegard was a poet, composer, artist, pharmacist, and theologian. She wrote hagiographies and plays as well as treatises on medicine and natural history.

St. Albert the Great (d. 1280) is called the last man to know all there was to know. In addition to being a holy bishop, he wrote on philosophy, theology, botany, geography, astronomy, zoology, music, and physiology, mostly with remarkable accuracy, especially given the time.

Blessed Nicolas Steno (1638-1686) was a Danish convert to Catholicism and a bishop, the father of geology whose work led to the fields of paleontology and crystallography and contributed significantly to the study of anatomy. He discovered how the circulatory system works, how muscles contract, where saliva comes from (the Stensen duct is named for him), and that the heart is a muscle. He also began to study fossils, famously realizing that the tooth-shaped stones believed to fall from the sky on moonless nights were, in fact, the fossilized teeth of prehistoric animals. This led to Steno’s most significant contributions to science: the basic laws of stratigraphy, still in use today, that made it possible for us to understand which dinosaurs came from which era and, ultimately, to determine the approximate age of the earth.

Venerable José Gregorio Hernández (1864-1919) was a Venezuelan doctor and scientist. He earned his medical degree in Venezuela before going on to study in Paris. He published on bacteriology, physiology, and philosophy, among other things. He spent his life working as a doctor and teacher, treating the poor for free, while pursuing holiness as a layman

St. Giuseppe Moscati (1880-1927) was a dedicated single layman, a doctor who served the poor for free and risked his life to rescue elderly patients during a volcanic eruption. He was a pioneer in the field of biochemistry whose published research led (among many things) to the use of insulin as a treatment for diabetes. He was among the first to use CPR and his innovative patient-centered method influenced the field as a whole and encouraged a more holistic approach to medicine.

Servant of God Takashi Nagai (1908-1951) was a married Japanese doctor, a convert from Shintoism and atheistic nihilism. The father of two worked at the leading edge of radiology research, eventually contracting leukemia from his exposure to radiation. His condition was dramatically worsened by the atomic bomb that incinerated his wife when it was dropped on Nagasaki. The poetry he wrote over the next several years, about suffering and forgiveness, transformed the way the Japanese responded to the catastrophic end of World War II.

Blessed Guadalupe Ortiz (1916-1975) was one of the first female members of Opus Dei. She earned a PhD in chemistry when she was 48, which she used as a chemistry professor and in her work to establish a mobile medical clinic for the poor. Known for her loud laugh and constant smile, Guadalupe was an award-winning research scientist, despite dying at only 58.

Blessed Benedetta Bianchi Porra (1936-1964) suffered from polio as a baby, which left her with a permanent limp and required her to wear a back brace. She began to lose her hearing as a pre-med student, but doctors believed it was psychosomatic. Possessed of a brilliant medical mind, Porra diagnosed herself with von Recklinghausen’s disease, a neurological condition that would ultimately rob her of all five of her senses. Her promising scientific career was cut short by her death at 27.

Servant of God Jerome Lejeune (1926-1994) was a married French pediatrician, geneticist, and father of five who discovered that Down syndrome was caused by an extra copy of chromosome 21. His later work identified several other diseases caused by chromosomal abnormalities, all of which together earned him the William Allen Award, the world’s highest honor for genetics. In addition to his scientific research, Lejeune was a vocal pro-life advocate, concerned especially with defending children whose lives could be threatened by their prenatal genetic diagnoses.