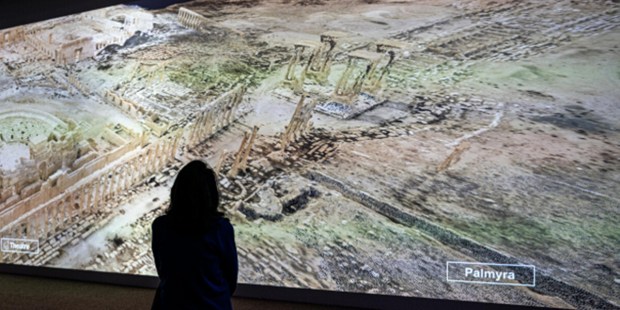 Palmyra and other sites reconstructed for Smithsonian visitors in virtual walk-through.

Visitors to Syria can no longer walk through the historic souk in Aleppo, Syria, without noticing the destruction from the Syrian civil war. And if they visit the Temple of Baalshamin in Palmyra, they will find a heap of rubble, thanks to the Islamic State group. Mosul, full of historic sites, was almost leveled when coalition forces retook the Iraqi city from ISIS.

But at an exhibition that opened recently at the Smithsonian Institution’s Arthur M. Sackler Gallery in Washington, D.C., visitors can walk through large 3-D reconstructions of the Aleppo Souk, stand in front of the Temple of Baalshamin in Palmyra and watch as the Great Mosque of al-Nuri’s signature minaret in Mosul is virtually reconstructed.

Age Old Cities: A Virtual Journey from Palmyra to Mosul, an exhibition organized by the Arab World Institute in Paris and created in collaboration with UNESCO, takes visitors to three cities in the Near East recently devastated by war—Palmyra and Aleppo in Syria and Mosul in Iraq.

The exhibition also presents historical photographs of the structures, video interviews with people from the cities and a VR component.

To preserve these sites for future generations, Age Old Cities offers large-scale projections and digital reconstructions (more than 11 feet tall) of iconic monuments and ancient structures rising from ruins to their former glory. The dynamic images underscore the importance of cultural heritage and architectural preservation as well as the vital role digital reconstruction can play in safeguarding the past.

“Age Old Cities doesn’t intend to provide solutions but rather to raise issues regarding the future of world heritage,” the show’s curator, Aurélie Clemente-Ruiz of the Arab World Institute, told Smithsonian magazine. “New technologies make it possible both to remind people of the beauty of monuments now gone, and to consider their future.”

The majority of the show is digital, rather than actual artifacts in display cases. But this can both create an immersive experience and collect a database of information for future reference. “In the process of collecting footage for the exhibition, Iconem, a startup that specializes in the digitization of endangered cultural heritage sites, has now amassed libraries of 3-D models and mappings of still-intact monuments,” Smithsonian said.

“This database of information is crucial,” said Bastein Varoutsikos, Iconem’s director of development. “People will use these 3-D models, extract information from them and use this information for the restoration process.”

“Through monumental projections on the walls, this mise en scène provided visitors with the impression of flying over the cities and gradually coming closer to the monuments, to the point of being able to see the details of a carved stone,” wrote the Louvre’s Yannick Lintz at Ars Orientalis. “The feeling of immersion was increased further by augmented reality, which the visitor could experience with a headset thanks to technology developed by Ubisoft, a video-game company. To the impressive images and the original soundtrack, special effects, animated pictures, and even scents associated with the various places were added to create a unique and mesmerizing immersive experience.” She continued:

In Age Old Cities, visitors discovered the devastation of a ruined Mosul recently liberated from ISIS occupation, and entered the famous Al-Nuri Mosque built by Nur al-Din Zangi in 1170–72. Then they flew over Aleppo’s citadel and penetrated the streets of the medieval city, eventually accessing the Umayyad Mosque. Accounts of inhabitants and interviews with local archaeologists and cultural experts further amplified the already overwhelming emotions felt by the exhibition’s attendees. … The journey ended … in the oasis of Palmyra, present in collective memory as the capital of the third-century Queen Zenobia, and a city at the crossroads of the spice trade. Here visitors could not stop looking at the Temple of Bel and the famous shrine of Baalshamin before and after they were destroyed (with a three-dimensional reconstruction of the latter).

The exhibit runs until October 25.