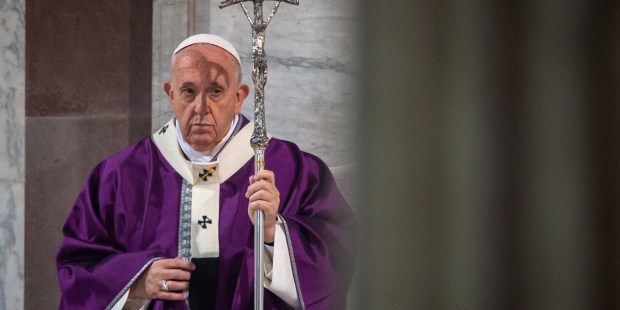 Though Francis is doing his annual retreat from home due to a cold, the Holy Father has not fallen victim to the pandemic.

Since February 27, Pope Francis has been working from home and canceling official appointments, but according to the Italian daily Il Messaggero, he has tested negative for coronavirus.

The 83-year-old pontiff, who is missing a portion of one lung due to an illness he had as a young man, has been suffering from what the Vatican called a “slight indisposition” for almost a week. In fact, he is following the annual Lenten retreat for the Curia from home, rather than going outside of Rome to a retreat house.

He was last in public on Ash Wednesday, when he had the morning general audience and a procession and Mass in the evening.

Meanwhile, Pope Emeritus Benedict XVI, who turns 93 next month, is being protected from unnecessary risks.

But a Vatican staff member is taking a precautionary quarantine because one of the members of his religious community tested positive for coronavirus after he last stayed in the religious community of Rome in about mid-February, following some stops in northern Italy during one of his trips.

Italy continues to be one of the countries hardest hit by coronavirus, with 1,835 confirmed cases and 52 deaths. Another 149 have recovered.

Read more:
Worried about the Coronavirus? Pray to St. Sebastian, as Catholics have been doing for centuries