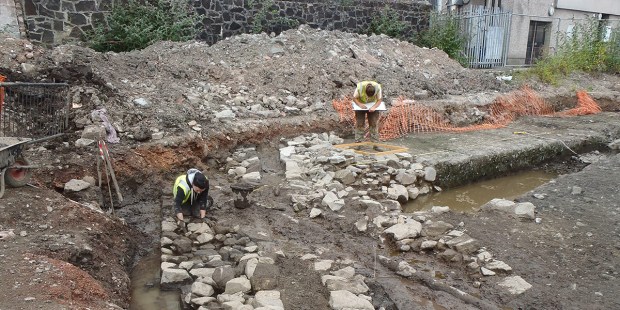 The rare find was released to modern-day Dominicans for interment and a memorial service.

Archaeologists working at a dig site in Stirling, Scotland, were surprised to find the remains of a man dated to the 13th century. Further study of the subject led them to determine that they had stumbled upon a rare example of a friar’s burial, based on artifacts found among the bones.

The find was made at a site known to have once been a Dominican friary, home to the Blackfriars from 1233 to 1559. Further dating of the remains place them between 1270 and 1320, placing the man’s life firmly within the timeframe of the Scottish Revolutionary War. This suggests that the man may have lived and fought among some of the great names of the age like Robert the Bruce, King Edward I, and William Wallace.

It was unclear, at first, whether the man was a member of the friary or a citizen of the area who was buried within the friars’ cemetery, but the presence of a belt buckle among the remains led experts to believe that he was a friar. The Scotsman reports that a spokesman for GUARD Archaeology, the company which is in charge of the dig, explained the significance of the belt buckle.

“… as friars were buried in their habits, buckles found near the pelvis indicate those individuals being friars of orders such as the Dominicans, as their rule required them to wear a belt with a buckle, rather than a rope cincture worn by other orders such as the Franciscans.”

The spokesman went on to note that radiocarbon dating showed that the man may have been alive to witness several famous battles that took place not too far from the Blackfriars’ home, such as “the battles of Stirling Bridge and Bannockburn.”

When the scientists were through with their tests, the remains were released to his present day Dominican brothers, who held a memorial service for the unknown friar, reinterring him in a fresh grave. The Falkirk Herald reports that the grave marker is a large stone quarried from Abbey Craig 150 years ago, donated by The Cowane’s Trust.