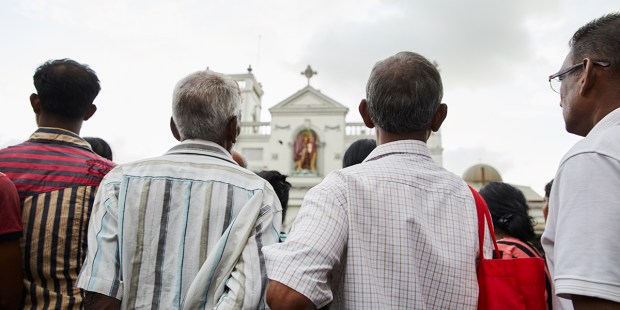 A new poll shows that although more than half of US Catholics are “very concerned” about the persecution of Christians around the world, that level of concern has sharply declined in the past two years.

The third annual nationwide poll examining the views of US Catholics on the global persecution of Christians was conducted by McLaughlin & Associates on behalf of Aid to the Church in Need-USA (ACN-USA), an international papal agency that supports suffering and persecuted Christians in more than 140 countries.

The softening of the level of concern about Christian persecution among US Catholics is also evident in their ranking of the importance of global issues. Global Christian persecution is ranked as less urgent an issue than human trafficking, poverty, climate change and the global refugee crisis. Catholics who identify themselves as being very devout are most concerned about the persecution of Christians, but even this group has ranked human trafficking the issue of greatest concern for three consecutive years.

As to actions US Catholics can take themselves, 68% of respondents ranked prayer as “very important,” followed by raising awareness of the plight of Christian persecution at the parish level (59%), donating to agencies that help persecuted Christians (53%) and contacting Members of Congress (52%).

As to their local bishop speaking out on Christian persecution, 27% say the bishop is “very engaged” on the issue, an increase of 12% compared to a year ago. But 24% say they are “unsure” about their bishop’s level of involvement and 12% say their bishop is “not engaged” at all.

Regarding the pope, 47% of US Catholics say he is “very engaged” on the issue of Christian persecution. But this figure is nonetheless down by 8% from a year ago, while 16% say they are “unsure” about the involvement of Pope Francis on the issue. Just 8% say the pope is “not engaged” when it comes to the persecution of Christians.

“While 52 percent of American Catholics show strong concern about the persecution of Christians, it is nevertheless disheartening to see the sharp drop in their number compared to two years ago,” said ACNUSA Chairman George Marlin, referring to the 25% decline in the number of US Catholics who say they are “very concerned” about global anti-Christian persecution. “It’s telling,” he said, “that US Catholics consider human trafficking, poverty, climate change, and the refugee crisis—as important as these issues are—to be more important than the persecution of Christians.”

“Two years ago, the genocidal campaign waged by ISIS against Christians and other minorities in Iraq and Syria had only just begun to decline,” said Marlin, “but memories of that atrocity have faded since then. This may well help explain the apparently lesser concern” about Christian persecution on the part of US Catholics.

“Sadly, receiving little coverage by mainstream media,” said Marlin, “is the plight of Christians in Africa, the persistent Islamist terror targeting Christians, particularly in Nigeria, but also throughout the Sahel region. Then there is the increasingly fanatical Hindu nationalism that threatens Christians in India and the ongoing repression of the Church’s freedom in China.” These hot spots of Christian persecution, charged Marlin, “must be put in the spotlight” to grab the attention of US Catholics.

“In light of the survey results, education at both the parish and diocesan level remains of crucial importance,” said Marlin, pointing at the significant percentage of Catholics who are either “unsure” about their parish’s or bishop’s engagement on the issue of Christian persecution, or those who say their parish and bishop are “not engaged.”

“The survey clearly shows that US Catholics believe that the Church in America can do much more when it comes to calling attention to the gravity of Christian persecution,” concluded Marlin, adding: “In a world where up to 300 million Christians are confronted with various forms of harassment and outright persecution because of their faith, the US Church simply must do more to inform and galvanize the faithful.”

This article was published by Aid to the Church in Need (ACN) and is republished here with kind permission. To learn more about ACN and help them in their mission to serve persecuted Christians visit www.churchinneed.org