Unpublished images of documents present in the Vatican archives on the pontificate of Pius XII (1876-1958).

The Vatican has opened its archives of the World War II-era pope Pius XII to researchers and historians, to set the record straight on the pope’s actions during the Holocaust.

Aleteia had access, last February 27, to the Vatican Archives’ repository and to 10 “selected” documents from the pontificate of Eugenio Maria Giuseppe Pacelli. 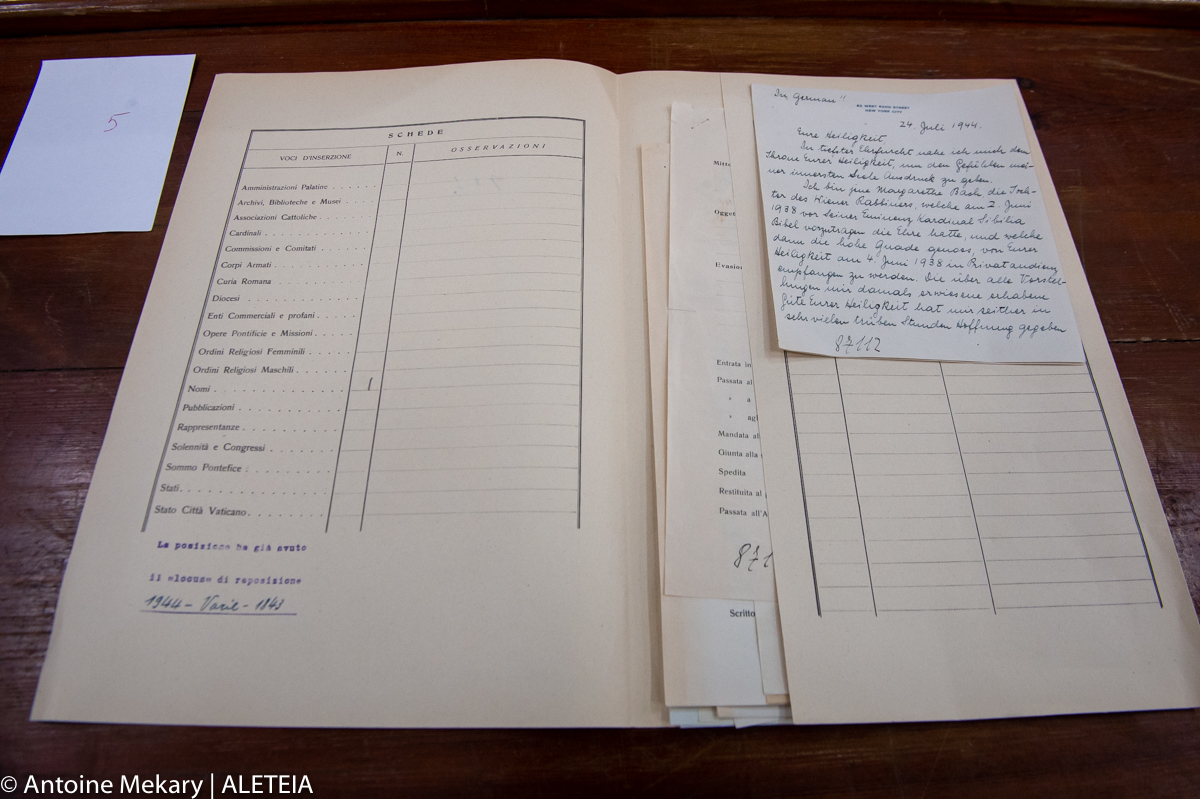 This slideshow presents a small sample of the kind of documents researchers can now see about one of the papacies most studied by historians today. We looked at only a few documents, which help clarify the true character of Pius XII. Obviously, historians will have the last word.

For example, experts will be able to study the letter of July 1944, in which Margarethe Bach, daughter of the Rabbi of Vienna, thanked Pius XII for the help they had received from him, and in which she says that during the upcoming Jewish holy days she would pray, together with her father, for the Pope.

Another document to which we had access was a request by the Chief Rabbi of the Holy Land, Yitzhak Herzog, for an audience with Pius XII, in April 1939 (See photo gallery, documents 3 and 4).

As of March 2, 2020, exactly 81 years after Pacelli’s election to the Chair of Peter, the Vatican has opened the Apostolic Archives and other archives of the Holy See with the complete documents of the pontificate of Pius XII (1939-1958), releasing the information to the public, and possibly—according to some Vatican voices—leading in the direction of his canonization.

Pacelli’s pontificate navigated the troubled waters of the 20th century from the Second World War to the Cold War, a period of 20 years during which many evils persisted: anti-Semitism, warmongering, colonialism, communism, fascism, segregation, and a long list of other horrors stained with blood.

The historiographical debate surrounding the figure of Pope Pius XII, especially attacked for his supposed “silence” surrounding the persecution of the Jews by Nazism, may now be illuminated by concrete evidence.

Nazi hatred of the Church

Pacelli, who was the papal nuncio to Germany from 1917 to 1930, first in Bavaria and then in the Weimar Republic, lived through the period of intensified Nazi propaganda and violence and their tactics to silence their adversaries, especially the German Church. Cardinal Pacelli was not well regarded by the Nazis.

Along these lines, in the recently opened archive it’s possible to see this hate-filled propaganda on display, for example, in the newspaper of the SS (Hitler’s special elite police force), “Das Schwarse Corps,” of July 22, 1937, in which a satirical caricature depicts Cardinal Pacelli embracing a woman with Semitic features, representing France and Communism.

The bishops of the Catholic Church were also targeted by this persecution. This can be seen on a poster from May 1939 put up on the roadside during Cardinal Michael Faulhaber’s trip to Mühldorf, bearing the words, “Fort mit Faulhaber, dem Judenfreund! Dem Handlanger Moskaus!” (“Away with Faulhaber, the Jew lover! The henchman of Moscow!”).

Other documents show that Pius XII discreetly helped save thousands of Jewish people during the Second World War, while the Nazis were ramping up their retaliation against enemies of the regime.

Pius XII followed closely the news of the horrors of Nazi massacres and reprisals. In March 1944, documents to which we now have access include a list of the people who were killed in the Fosse Ardeatine massacre—a list that Pope Pacelli held in his hands as he entrusted their souls to God.

That massacre was a Nazi reprisal, ordered in person by Hitler following an attack by a partisan group carried out on March 23 of that same year, in Rome.

The target was a battalion of the Polizeiregiment Bozen. The attack was carried out by 18 partisans; they used a homemade explosive device. The explosion caused the instant death of 28 Nazi policemen and two Italian civilians. The partisans managed to escape unscathed by mixing with the passers-by.

Hitler learned of the incident and had 10 Italians executed in retaliation for every German killed, although in the end the sum was rounded up to 335 civilians. The massacre was organized and directed by Herbert Kappler, the Gestapo commander in Rome who was also responsible for the raid on the Jewish ghetto in 1943.

In the archive there are various documents revealing the pope’s charity, from which emerges the figure of a pope who acted with discretion also in this area, without wanting publicity. The current exhibit of documents includes a postwar letter from needy German children thanking Pope Pius XII  for the gifts he sent them on the occasion of their First Communion (April 1948).

Another of the documents on display is a draft of the Encyclical “Mystici Corporis” (June 29th, 1943) on the Mystical Body of Christ, with corrections by Pius XII.

This is the encyclical issued in the midst of the Second World War. It’s a document much debated during and after the Second Vatican Council. The Church as a living body, the pope argued, is neither purely physical nor purely spiritual, but supernatural.

Also on display is the December 24, 1944, original text of Pius XII’s Christmas radio message, with handwritten corrections. The discourse shows a pope concerned about a world in flames, who makes an allusion to what the world would later recognize: “If ever a generation has been obliged to feel in the depths of its conscience the cry: ‘War against war!’ it is, without a doubt, the present one.”

In his Christmas message two years earlier, he lamented the fate of “those hundreds of thousands, who through no fault of their own, sometimes only because of their nationality or race, are destined for death or progressive extinction.”

In 1952, the pope received almost half a million people in public audiences: war orphans and amputees, farmers, miners, athletes, journalists and sports psychologists, doctors, artists, astronomers … In order to offer everyone a message of understanding and encouragement, the pope meticulously prepared his speeches, which even today stand out for their very high level of moral, technical and scientific content.

This aspect of his intellectual versatility and pastoral sensitivity can also be studied in detail in the archive’s collections that are now available for consultation by scholars. Pius XII met with an enormous number and variety of people during his pontificate, including but not limited to the Holy Year of 1950.

The almost twenty years of Eugenio Pacelli’s complex and dramatic pontificate include World War II, the period of reconstruction, and the opposition of the western and eastern blocks, but also the birth of organizations and initiatives in the Church and society which would be developed in the following years.

According to the administration of the Vatican Apostolic Archives, the importance of this opening of the archives lies in the possibility offered to scholars to access all the sources, studying these and other problems from a perspective that was not possible until now.

The years of Pius XII’s pontificate were also characterized by a marked globalization of society and the opening of the Church to a less Eurocentric and more universal dimension.

Also on display will be documents showing the efforts made to try to respond to requests for help in saving the persecuted and the needy whose lives were at risk, Archbishop Paul Richard Gallagher, Secretary for Relations with States, told Vatican News.

Now, historians will be able to verify whether indeed, as critics such as historian John Cornwell claim, Pius XII was the “ideal pope” for Hitler’s deadly plans, as Cornwell describes in a best-selling book, Hitler’s Pope. From the few documents we’ve been able to see, there’s nothing to fear: the truth will come out.