Finding Faith: Can you spot the crucifix hidden in this painting? 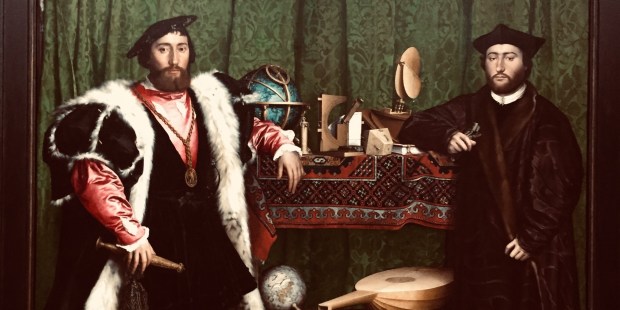 The artist Hans Holbein was a Catholic painter at the English court, where Papist symbolism had become highly unfashionable.

Hans Holbein’s famous double portrait known as “The Ambassadors” is in the news again. It has just been rehung next to a portrait of King Henry VIII, the potentate that the two Catholic ambassadors were visiting. This painting usually receives attention for the weird blob in the foreground, which turns out to be a memento mori skull when viewed at the right angle. What tends to be overlooked is a crucifix hidden in the top left corner. Was the blob in fact a distraction from the sight of a crucifix, which is not easy to spot even when you know it’s there? Holbein was a Catholic painter at the English court, where Papist symbolism had become highly unfashionable.
Lucien de Guise is on Instagram @crossxcultural. As a Catholic writer, editor, curator and former museum director, his aim is to build bridges through art.