Mass in the time of COVID-19 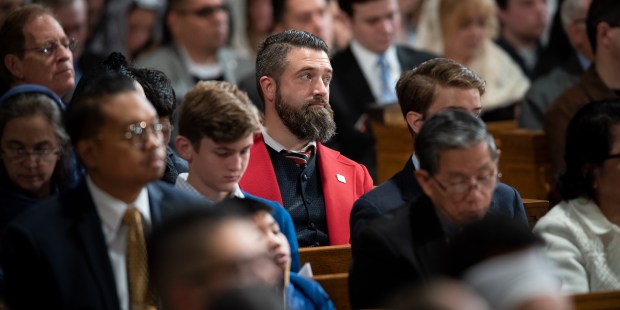 The Church does not fail, whatever the trials of the day, to offer the whole Christ to all of the faithful.

Last Thursday afternoon, residents of Washington, DC, learned that the new coronavirus had arrived at their city’s doorstep. Earlier that day, Maryland confirmed that three of its citizens had contracted the virus. On Friday, as prior of the Dominican House of Studies in Washington, I followed the example of superiors and pastors around the country and implemented measures aimed at preventing the spread of the virus in my community.

These measures include significant changes to liturgical practice, namely the suspension of exchanging the sign of peace and receiving communion under both species (the body and blood).

Given how the coronavirus spreads, these two measures represent common-sense steps toward preventing future infections. At the same time, they represent consequential alterations of familiar religious practice. This is not to be taken lightly, and most superiors and pastors do not. More than changing where the celebrant sits or where the choir members stand, suspending the sign of peace and communion under both species touches on how the Christian community has grown used to communicating with God and with each other at Mass.

Sensitivity has to be shown, therefore, to those not only worried about the spread of disease but also disoriented by these liturgical changes. The Mass may appear suddenly to be less, to mean less, or to give less than usual. The good news is that these changes touch nothing of the essence of the Mass.

The good news is that these changes touch nothing of the essence of the Mass.

The sign of peace has become a beloved expression of reconciliation and unity among believers just before they approach the altar to receive communion. Husbands embrace wives, parents embrace children, friends embrace friends, and strangers embrace strangers, each wishing the other the peace of Christ. When prayed attentively, this is a beautiful prayer.

Christ remains the source of his peace, and he gives his peace to his disciples through his presence in the whole liturgy, namely through the proclamation of the scriptures and in the celebration of the Eucharist. Christ gives his peace to those who gather to pray to him, to hear his Word, and to offer the Eucharistic sacrifice. It may be prudent for the Church not to express that peace for a time by a kiss or a handshake, but that doesn’t mean that the faithful at Mass don’t receive Christ’s peace in full. We do.

While communion under both species expresses more fully the sign of the Eucharistic sacrifice as a meal, it isn’t necessary to receive both in order to participate fully in the sacrifice itself.

As the Catechism reminds us, communicants receive the whole Christ under either species of the Eucharist:

Since Christ is sacramentally present under each of the species, communion under the species of bread alone makes it possible to receive all the fruit of Eucharistic grace” (par. 1390).

Jesus does not give us less of himself if we receive him only in the Sacred Host or in the Precious Blood. He gives his whole self under each species. It may be prudent for the Church not to enjoy for a time the full expression of the Eucharistic sign, but that doesn’t mean that the faithful at Mass don’t receive the full grace of the sacrament. We do.

In these trying and uncertain times, the Church does not retreat from the world’s troubles. She may simplify her life for a moment or two, in order to safeguard her children from harm, but she surrenders nothing of her essence in doing so. She remains the guardian of Christ’s truth and the steward of his grace. As such, the Church does not fail, whatever the trials of the day, to offer the whole Christ to all of the faithful.

Read more:
Coronavirus: What should Catholics do?