Saints to call on in a pandemic 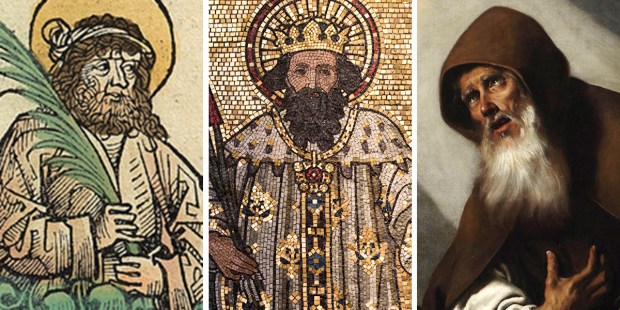 Basically every situation we face in life has a heavenly intercessor specifically linked to it.

We Catholics have a lot of patron saints, such that basically every facet of life experience is covered by some saint who has a connection to it.

Even if a situation looks plain impossible, we can always turn to St. Jude, the patron of Impossible.

The reasons that saints are connected to their patronages can be obvious and direct, or sometimes quite humorous. But it’s consoling to know that a heavenly intercessor is always at the ready to present our needs to the Lord.

Read more:
The patron saint of TV… from the 13th century?

It’s not surprising, then, that we have a handful of saints to call on in pandemics. Since coronavirus is on everyone’s mind, here are a few saints with whom we can strike up a conversation about our present needs.

St. Quirinus of Neuss – Patron for those affected by bubonic plague and smallpox

Quirinus was born in the first century and died in the year 116 A.D.  Legend has it that he was a Roman tribune and was ordered to execute Alexander, Eventius, and Theodolus. These men had been arrested on orders of the emperor. Their crime: being Christian.

But Quirinus witnessed miracles performed by the three men and was baptized into the faith along with his daughter, Balbina. He and Balbina were decapitated for becoming Christian and buried in the catacomb on the Via Appia.

Move ahead 1,500 years. Documents from Cologne, dated 1485, say Quirinus’ body was donated in 1050 by Pope Leo IX to his sister, the abbess of Neuss. Soon after, Charles the Bold of Burgundy laid siege to Neuss with his army spreading from western Germany, the Netherlands, and as far south as Italy. The citizens of Neuss invoked Quirinus for help, and the siege ended. Wellsprings popped up and were dedicated to him. He was then called on to fight against bubonic plague and smallpox.

This saying by farmers is associated with Quirinus’ feast day of March 30, a similar tradition to Groundhog Day. It reads, “As St. Quirinus Day goes, so will the summer.”

St. Anthony the Great – Patron of those affected by infectious diseases

One of the greatest saints of the early Church, Anthony was one of the first monks and is considered the founder and father of organized Christian monasticism.

He organized disciples into a community and these communities eventually spread throughout Egypt. Anthony is known as Anthony the Great, Anthony of Egypt, Anthony of the Desert, and Anthony of Thebes.  He is also known as the Father of All Monks. His feast day is celebrated on January 17.

St. Anthony the Great is also invoked as a patron against infectious diseases.

Read more:
Fight anxiety by drawing strength from this icon of St. Anthony

Edwin the Martyr (St. Edmund) — Patron for victims of pandemics

Edmund is an acknowledged patron against pandemics. Much is written about this saint from the 9th century who died in 869. Interestingly though, hardly anything is known for certain about him. Yet there are churches all over England dedicated to him. The Danes murdered him when they conquered his army in 869.

Edmund the Martyr, in addition to being the patron saint invoked against pandemics, is also the patron of torture victims and protection from the plague.

We might mention a few more saints who are patrons for those who struggle with familiar illnesses and afflictions:

The list is endless. What’s certain is that the saints are waiting for your call.