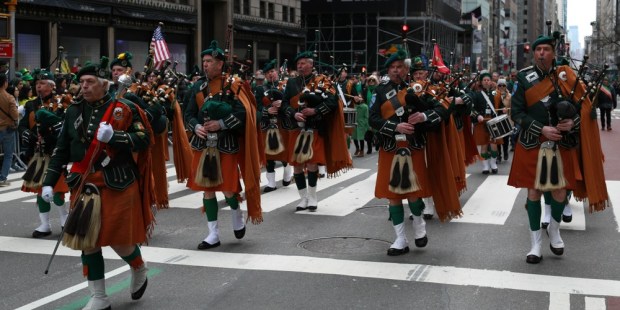 Mayor Bill DeBlasio said on Monday that there were no plans to cancel the Big Apple’s parade; on Wednesday morning he said he is considering it.

As local, state and government officials ramp up efforts to slow down the spread of the coronavirus disease COVID-19, large events that draw as many as 1,000 people are being canceled.

The St. Patrick’s Day Parade in New York City draws a couple of million, with hundreds of marching units, people lining the streets of Fifth Avenue in close proximity, lots and lots of people taking trains and subways and buses to get there, and of course, those in celebratory moods who wish to continue honoring Ireland’s most famous saint in local establishments.

There’s plenty of opportunity to share the potentially deadly virus there. All of the parades honoring the Apostle to the Celts have been canceled on the Auld Sod — Dublin and other major Irish cities have nixed this year’s festivals. And U.S. cities are also being cautious: Boston and Chicago have canceled their parades, and New Haven, Connecticut has postponed its march, which was to take place this Sunday.

And while New York Mayor Bill DeBlasio said on Monday that there were no plans to cancel the Big Apple’s parade, on Wednesday morning he said he is considering it.

“We’re going to be making a decision on the St. Patrick’s Day Parade. I want to speak with a few more people, but I’ve been speaking with health experts — Dr. Anthony Fauci, [director of the National Institute of Allergy and Infections Diseases], who I believe is one of the best in the nation,” Cuomo said at a news conference. “This is his strong recommendation: just reduce large gatherings. Why would you risk bringing thousands of people together, knowing that this is a virus that easily communicates? … St. Patrick’s Day is one of the great convenings of a large number of people. … If you listen to the experts, they would say you should not be having a St. Patrick’s Day convening at this time, which I believe makes sense.”

There were 10 new coronavirus cases in New York City, bringing the total to 46, according to de Blasio, who said he is having conversations about canceling the St. Patrick’s Day Parade on March 17.

“We’re talking it through with the parade committee,” the mayor said, according to the New York Post. “We have to really think about this one because it’s a beloved event, an important event,” he said, claiming there’s a smaller chance of spreading the virus because the parade is outdoors.

As of Wednesday morning, there was no indication from the parade’s website that cancellation was in the works.

“The NYC St. Patrick’s Day parade Inc. has been held every year since 1762. We have received no notice from the authorities about postponement at this point,” said parade chairman Sean Lane, in a statement on the site. “We recommend checking with your local health officials, government,   and where appropriate, your personal physician for guidance.”

Lane’s statement advised people to follow a link to the Centers for Disease Control and the New York State Government “and take special note for those most at risk.”

“We need to work together as a community to protect the most vulnerable among us,” Lane concluded.