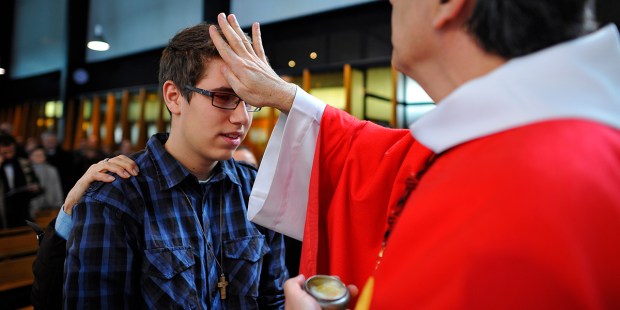 What it means to be a Catholic man today.

I was asked to give a brief talk this past weekend to a group of about 30 boys at our parish receiving their Confirmation. The topic was what it means to be a Catholic man. Here is a summary of what I told them.

The phrase “toxic masculinity” is thrown around a lot in our culture; it suggests a manhood that is all about aggression, domination, self-reliance, and exclusion. And there’s something to this. These things can turn into abuse, corruption, egotism, and hatred.

We see these two paths everywhere in the culture. But they’re both dead ends. They both end in disaster for us as men. Why? Because they fail to deal with our deepest identity. One sees us as animals; the other sees us as ghosts. But we’re not animals, and we’re not ghosts; we’re men.

There is a third path—one found not in the culture but in our Catholic faith. It is authentic masculinity, which is a moral and spiritual masculinity. I’d like to present this vision of manhood using “Four S’s”: Self-sacrifice, Silence, Study, and the Sacraments. And as we go through these, we’ll see just how countercultural this path is.

Self-Sacrifice: Your life is not about you

Sacrifice not a word that we hear a lot today. We talk about being happy, having fun—not sacrifice. But as men, we understand the logic of sacrifice. If you’ve ever been serious about sports or music, you know that, to get better, you have to train and practice constantly; you have to discipline your body and mind; you can’t always be going out with your girlfriend or hanging out with your friends. This kind of sacrifice is built into our DNA.

But here’s the thing: your life is not about you. Your DNA of sacrifice is ultimately, with God’s grace, meant to become a sacrifice of your own selfishness: first, by loving God, and second, by loving others. This is what will make you truly happy and fulfilled. As Pope Emeritus Benedict XVI said: “The world offers you comfort. But you were not made for comfort. You were made for greatness.” And true greatness comes through self-sacrifice.

But how? Primarily through vocation. Every man in this room is called to one day be one of three things: married, single, or a priest or religious brother. And each vocation involves self-sacrifice. Getting married and having three kids is the most wonderful, beautiful thing I’ve ever done, and I mean that sincerely. But does that mean it’s easy? No; it can be very difficult. As a husband and father, you are called to be faithful to your wife, to be open to children, and to provide for, protect, and lead your family. It requires a daily sacrifice of selfishness. The same goes for priests and single men, who sacrifice for their communities and families, and of course sacrifice sexual intimacy, which is a gift given by God uniquely for marriage.

But even now, as young people, you are called to self-sacrifice. This includes guarding yourself against temptations—to bullying and violence, to pornography (a scourge that destroys lives) and premarital sex, to drug and alcohol abuse.

None of this is easy. But we’re not alone in the battle. We have the help of the ultimate role model: Christ himself. God sent his only Son into our messed-up world; he healed, taught, and served others; and then, at the end of his life, he gave himself away in the ultimate sacrifice to save us from sin and death: the cross.

How do we respond? He told us: “If any want to become my followers, let them deny themselves and take up their cross daily and follow me” (Luke 9:23).

Silence: Do not be afraid of silence

Cardinal Sarah said this about noise: “Noise is a whirlwind that avoids facing itself….But this noise is a dangerous, deceptive medicine, a diabolic lie that helps man avoid confronting himself in his interior emptiness. The awakening will necessary be brutal.”

Interior emptiness: this is what is behind all of the noise. And as men, we get caught up in that culture. We feel like to be somebody, we have to make a lot of noise; to be wise, we have to absorb a lot of noise. But the opposite is true! We are truly somebody and truly wise when we’re silent, because in silence we encounter God.

Now, this doesn’t mean we never talk or stand up for what’s right. It just means that our speech flows out of silence. And this means getting rid of distractions. Lent is a great time to put the phone down—to take a break from constantly sending and receiving noise and spend more time in silence.

But at its core, silence is about keeping God in the center of your mind and heart, and not getting caught up in the “noise” of a million different things. It means being centered on God, watching and listening for his promptings, and then acting on them. Cardinal Sarah adds: “Interior rest and harmony can flow only from silence. Without it, life does not exist. The greatest mysteries of the world are born and unfold in silence.”

We can again look to Christ—whose silence, Cardinal Sarah says, is a silence of “self-sacrifice.” But we also have the example St. Joseph, my own confirmation saint. Why? Because the Bible does not record him saying a single word. Not one. But it’s not because Joseph doesn’t care or is a coward. He is a man of faith and “a righteous man” (Matt. 1:19). He is a carpenter—a man of strength and discipline. And he is a man of action and purpose. He hears and acts on God’s promptings in his life, getting up in the middle of the night to protect his wife and his child from danger. And he raises his son with faith. Look to his example, and ask for his prayers.

Study: Take up and read!

Our culture tends to treat studying as something you do in school, and just because you have to. You learn what you have to learn to move to the next step, and then, when you leave school, you stop learning. For men especially, learning is treated as either learning something that should be practical and technical, or something that we shouldn’t do at all.

But you can be a man’s man and also a man of letters. Authentic masculinity means always learning—outside of and beyond school.

First and foremost, we must learn from Scripture. St. Jerome said, “Ignorance of Scripture is ignorance of Christ.” So to know, love, and serve God, we have to open our minds to his word.

But we also have to learn from literature, especially the literature of the Church. As Bishop Barron said: “Baptized prophets should exercise their brains by studying philosophy, theology, spirituality, Church history, and the lives of the saints. And they can’t be satisfied with reading superficial tracts designed for children.” You are not children anymore; it’s time to challenge yourself in your reading.

This is easier with recommendations, and role models. So I’m recommending six books to you to have on your shelves in the years to come. I consider them gold standards for teaching the faith, and their authors demonstrate this virtue of study: St. Augustine’s Confessions, C.S. Lewis’ Mere Christianity, G.K. Chesterton’s Orthodoxy, Robert Barron’s Catholicism, Peter Kreeft’s Christianity for Modern Pagans, and Brandon Vogt’s Why I Am Catholic.

Sacraments: An invitation to spiritual warfare

As Catholics, we have a third view, which is sacramental. We believe that physical realities are the sign and cause of spiritual realities. And the peak of this is in the seven sacraments of the Church.

You are preparing for Confirmation, a beautiful sacrament of strengthening to help you defend the faith. But I’m sure you’ve heard a lot about it, and also, it happens just one time in your life. Instead, I want to emphasize two other sacraments that are offered most frequently in our lives: Confession and Communion.

Why is Confession important? Because as men, we’re going to fail. We’re going to make the wrong choices. In short, we’re going to sin. But real men admit their mistakes; they seek God’s word of forgiveness; and, importantly, they commit themselves to getting back up and trying again. This is what the sacrament of Confession is all about. My friend Jared Zimmerer put it this way:

“I think for men in particular [Confession is] a sacrament of grit….No matter how many times you have to confess the same thing over and over you just keep going, keep going, keep going … Men are called to fight … What the sacraments do is invite you into the spiritual warfare that Christ accomplished on the cross.”

This takes us to the most important sacrament: the Eucharist. The Eucharist is three things: a sacred meal, the Real Presence of Christ, and a sacrifice. Most people today get the meal part; but they don’t get the last two. A recent poll even found that nearly 70 percent of Catholics don’t believe in the Real Presence. But when you go to Mass, God himself, made flesh in Jesus Christ, is really present on the altar under the appearances of bread and wine. And his sacrifice on the cross is present too. The Catechism teaches: “The Eucharist is thus a sacrifice because it re-presents (makes present) the sacrifice of the cross.” This is a powerful, sacred moment.

Be men of the sacraments; go to Mass often.

I hope to see you there.